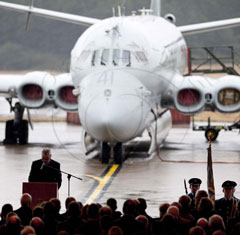 Kinloss – view picture gallery
Located on the edge of the Moray Firth, some 8 miles north west of Elgin, construction of this station commenced in early 1938, when a large grass airfield and perimeter track were established. On the 19th of April 1940 the above school departed for Cranfield, when soon after No.45 Maintenance Unit (M.U) formed to commence the task of aircraft storage and maintenance, using mainly the storage hangar facilities around the perimeter. The M.U tended to specialise in bomber aircraft such as Whitleys, Wellingtons and Bostons, but later Halifaxes and Spitfires fighters. This unit was to have a long stay at Kinloss that lasted until 1956. The squadrons involved were only here on detachments, operating with Hampdens, Whitleys and Wellingtons. 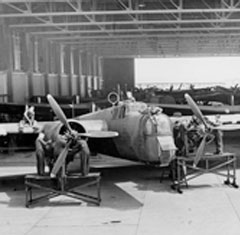 With the build up of Bomber Command there was a requirement for additional aircrew training establishments. To help satisfy this demand, No.19 Operational Training Unit (O.T.U) formed at Kinloss on the 17th of May 1940. It was furnished with around 24 Whitley Mk5 aircraft.

Pilots, navigators, bomb-aimers and air-gunners, would arrive here from their respective basic training stations, then sort themselves out into crews of five, before starting their 12 to 14 weeks course of operational training. Unfortunately scores of crashes occurred on all such units, and in this instance numerous Whitleys finished up in the Moray Firth, or even worse, flying into mountains.

As well as the large fleet of Whitleys the unit also possessed a few Lysanders or Miles Masters, employed in towing targets for air gunnery, plus Hurricanes for fighter affiliation practice. In mid 1944 Vickers Wellington aircraft started to replace the staggering old Whitleys, but in early 1945 the need for new crews started to decline, until No.19 O.T.U disbanded on the 26th of June 1945.

Coastal Command then took over the station, when No.6 (Coastal) Operational Training Unit arrived on the 18th of July 1945. This unit was involved in training aircrew to fly Beaufighter and Mosquito aircraft in an operational manner. To bring it into post-war standards, the unit was renamed No.236 Operational Conversion Unit on 31st July 1947. In April 1951 it was the first to receive the new Shackleton aircraft, whilst in early 1952 twin engined American built Lockheed Neptunes operated alongside.

Kinloss also housed an operational maritime squadron from December 1950 onwards, this being No.120 equipped initially with Lancasters, until replacing them with Shackletons. This squadron remained here until departing for Aldergrove on the 1st of April 1952. By 1957 the Cold War was beginning to thaw, which resulted in Coastal Command reducing in strength. At the end of September 1956 the resident O.C.U disbanded, but its staff were taken on by the School of Maritime Recce that arrived from St.Mawgan, which was quickly renamed the Maritime Operational Training Unit. It operated with Shackletons, its role being training of crews in the anti submarine and anti shipping techniques, which was becoming a very sophisticated with radar detection, diesel oil sniffing and sonar etc.,

Nos.201 and 206 Squadrons were the main residents, initially flying the latest version of Shackleton until receiving the four-jet powered Nimrod (based on the Comet airliner) in 1970. At the time of writing in 1995, the station is still acting as a NATO maritime defence base, with its compliment of two operational Nimrod equipped squadrons and the O.C.U in residence. This is a sad reflection of the strength of our maritime air defences, where Kinloss is now the only station serving in this capacity.
Author: Guy Jefferson