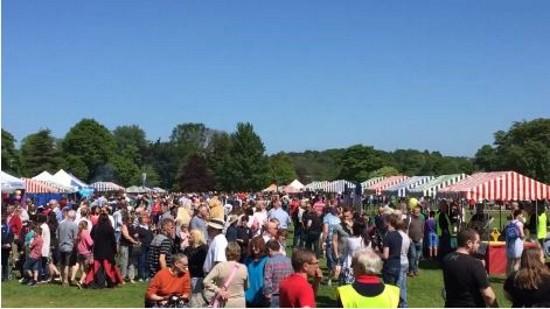 AN ESTIMATED TEN Thousand people gathered at Elgin’s Cooper Park yesterday as the sun shone on one of the biggest days in the calendar.

Every two years the Lord Lieutenant of Moray, Grenville Johnston, led the way for the biennial Motorfun event organised by the Elgin Rotary Club.

Over 400 classic cars and motorcycles form the centrepiece of the event – but Motorfun has grown into much, much more than a classic car festival, in particular this year as it doubled as a celebration of the Queen’s 90th Birthday.

Lt Col Johnston read a message from her majesty giving her best wishes to the people of Moray – and another from the Princess Royal, who is an honorary member of the Elgin Rotary. The Lord Lieutenant expressed his own delight that the sun had decided to bless Elgin with the best-ever weather for the event.

He said: “In all the years this has been happening I think this has been the best weather for it – the queue for hamburgers and ice cream has not diminished since we got here, and that shows people are having a good time.”

The park was awash with happy families for an event that Rotary president Donald Miller said was a “thank you” to local people for the support they continue to give the group – in particular the ‘Marafun’ that is also biennial and raises thousands of pounds for local charities.

He said: “It has been a magnificent day with tremendous crowds – we set up a marquee as a birthday lunch for the Queen, although there are street parties next weekend with Motorfun being so close we decided to do something ourselves.”