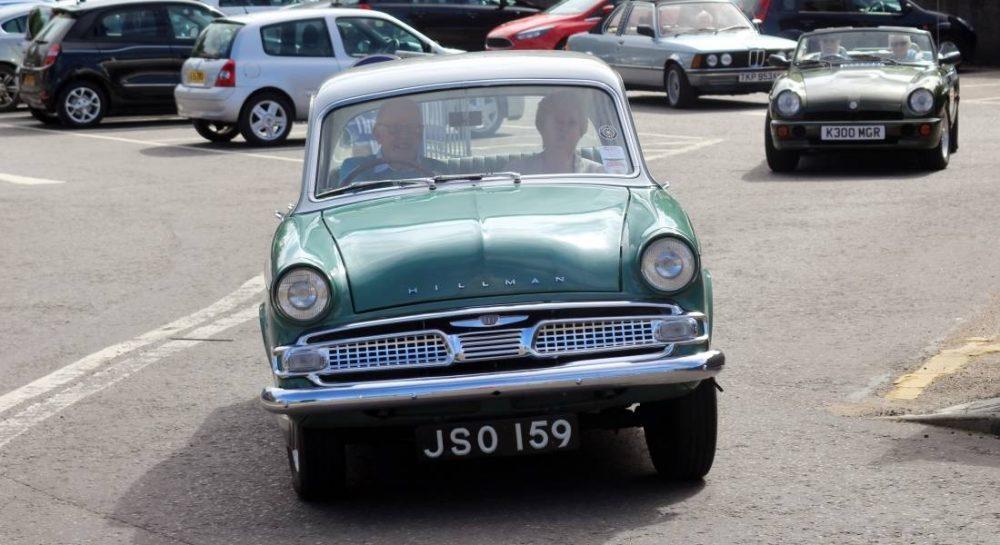 SHOPPERS VISITING DECORA in Elgin yesterday were treated to a close-up of some stunning classic cars as they prepared to set off on the CLAN Cancer Support Cavalcade.

The third running of the parade through Moray and Aberdeenshire set out from the Decora car park a little before 10.30am on Friday – and turned heads all along the route Ballater via Royal Deeside before looping back to Elgin.

A 1997 Ferrari was in the parade alongside a 1978 MGB and several other flashy sports cars – but star of the parade (for this writer at least) was the little 1962 Hillman Minx, purchased new in Elgin and just two owners and over 50 years later, still at home in the town with all its original parts.

The event this year was held in honour of its founder, Ron Billing, who sadly passed away earlier this year. As well as being a keen member of Moray Historic Wheels, Ron was a support volunteer for CLAN in Elgin. His widow Mary was on hand to wave the cars off yesterday alongside the Lord Lieutenant of Moray, Grenville Johnston.

Tracy Sellar, CLAN’s Moray services co-ordinator, said: “The CLAN Cavalcade has been growing in size for the last two years and we were delighted to welcome so many car enthusiasts to this year’s event – it was quite the sight to see the fleet leave Elgin and make its way south all in support of CLAN.

“The event has an important role in raising funds for CLAN but it also helps shine a spotlight on many of our regional support and wellbeing centres. CLAN supports people affected by cancer across the north and north-east of Scotland and it’s great to give those taking part in the cavalcade event an insight into the scope and geographical location of its offering.

“I’d also like to thank those who came together on the day to show their support for CLAN. I’m sure Ron would have taken great pride in the turnout and seeing so many people give up their time to do their bit for a charity that was very close to his heart.”