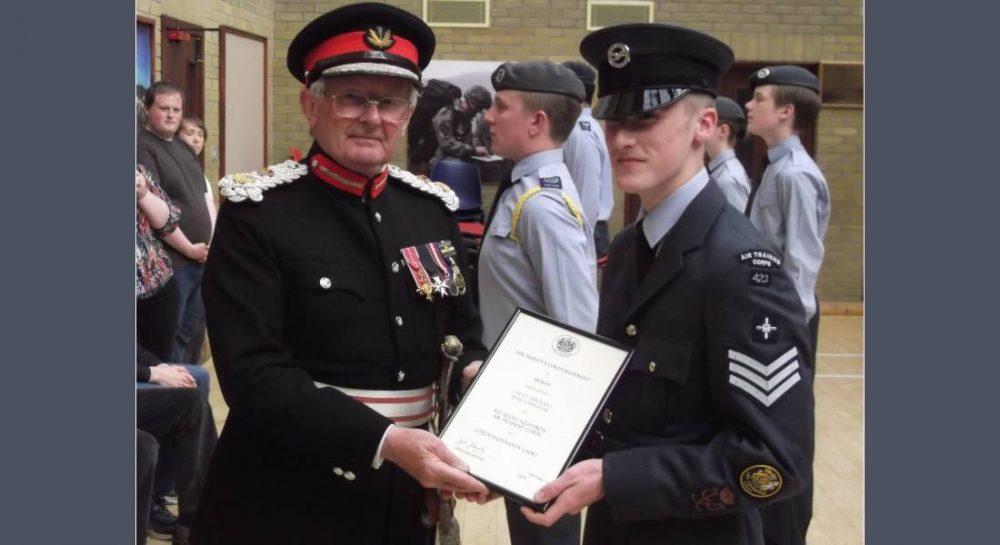 A BRIGHT FUTURE seems assured for a Moray ATC cadet sergeant after he was presented with a major award this week.

Ryan Johnston is a long serving member of 423(Elgin) Squadron – and while that in itself might be enough for any young man, Ryan is also a piper with 2622(Highland) Squadron, who recently emerged as a section winner in the European Pipe Band Championships in Forres.

The busy teenager can also be found taking up duty as the Pipe Major for the Scotland and Northern Ireland Cadet Pipe Band – and with the Air Training Corps Pipe Band!

This week proud friends and relatives looked on as Ryan was presented with the Lord Lieutenants Cadet Award. Colonel Grenville Johnston KCSG presented Ryan with the prestigious award.

Lord Lieutenant Cadet Awards are recognised as laudatory honours throughout the Ministry of Defence and supplement honours bestowed by HM the Queen in New Year and Birthday Honours Lists, ranking after such awards.

The Lord Lieutenant congratulated Cadet Sergeant Johnston after inspecting the cadets – and was pleased to note that so many of them had attained Duke of Edinburgh awards, saying he considered these to be a “worthwhile award for young people”.