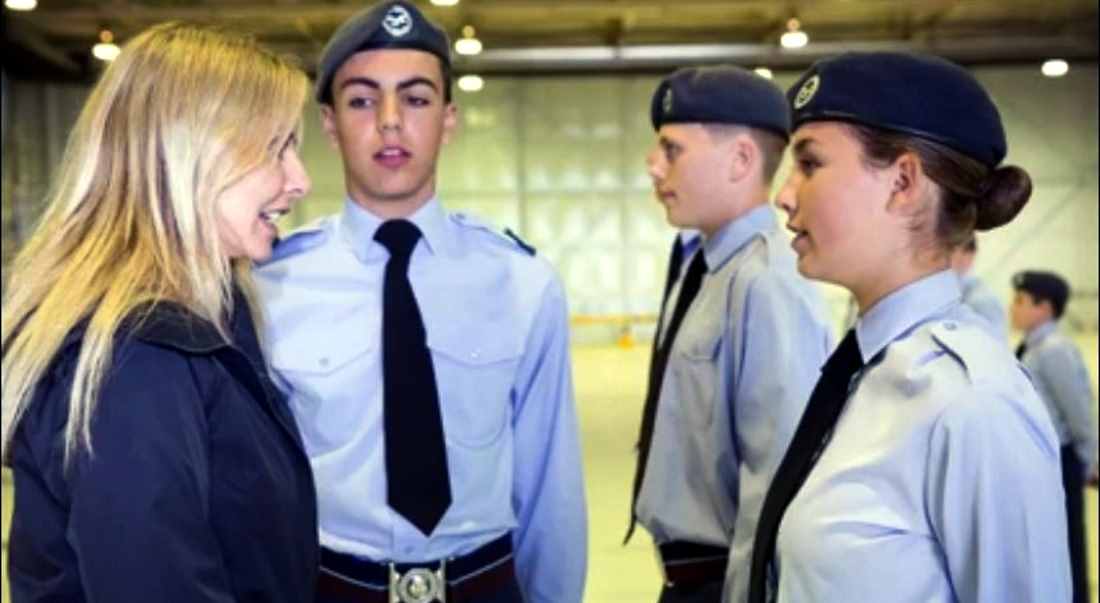 HONORARY GROUP CAPTAIN and television personality Carol Vorderman flew into RAF Lossiemouth this week for a tour of the station and a chat with local Air Cadets.

Carol is an ambassador to the Air Cadets, an experienced pilot and enthusiastic champion of Science, Technology, Engineering and Maths (STEM) subjects.

On arrival at the base she chatted with local schoolchildren and was shown the range of activities which Air Cadets undertake, she also visited cadets and staff at the Scotland and Northern Ireland Regional Activity Centre.

The centre is used by groups of Air Cadets who also take part in week-long camps at the Station – and Carol watched a large group from the West Mercian Wing perform some excellent drill.

Carol said: “I always love my time with Air Cadets, they are such a wonderful group of young people and we always have a great time together.

“I probably give about 25 days a year to the ACO now and enjoy every single minute of it. I am a mother of two children (they are young adults now – how time flies!!), both of whom were cadets. My daughter Katie was also in a University Air Squadron for a number of years, so it’s been a part of our lives for many years.

“I’m also delighted to report that the percentage of girls in the ACO is growing quite quickly. When I was young we girls were not allowed to join Air Cadets, University Air Squadrons (I was turned away from Cambridge UAS in 1978), or join up as a potential pilot. How times have changed – for the better.”

Carol flew herself across the Highlands in her Diamond DA42 for the visit, and was able to talk about the flying skills required in order to hopefully become the ninth woman to complete a solo flight around the World, a flight planned for next Spring.

During her visit she took time to speak to personnel from RAF Lossiemouth and discuss the vital role of women in the forces and her own view on the importance of equality in STEM. She also joined an evening briefing with II(AC) Squadron before flying in a Typhoon.

RAF Lossiemouth Station Commander, Group Captain Paul Godfrey, said: “It was a real pleasure to be able to host Carol here at RAF Lossiemouth and show her the huge range of activities we undertake.

“She was very generous with her time with the children and Air Cadets and definitely generated a huge amount of enthusiasm for the STEM subjects she discussed.

“Carol has a huge amount of admiration for the Cadets and judging by the selfie requests they were very pleased she was here. It was great to be able to take her flying as, being a pilot herself, she was really interested by the differences between her aeroplane and the Typhoon and the sorts of preparation we undertake for high performance flying.”