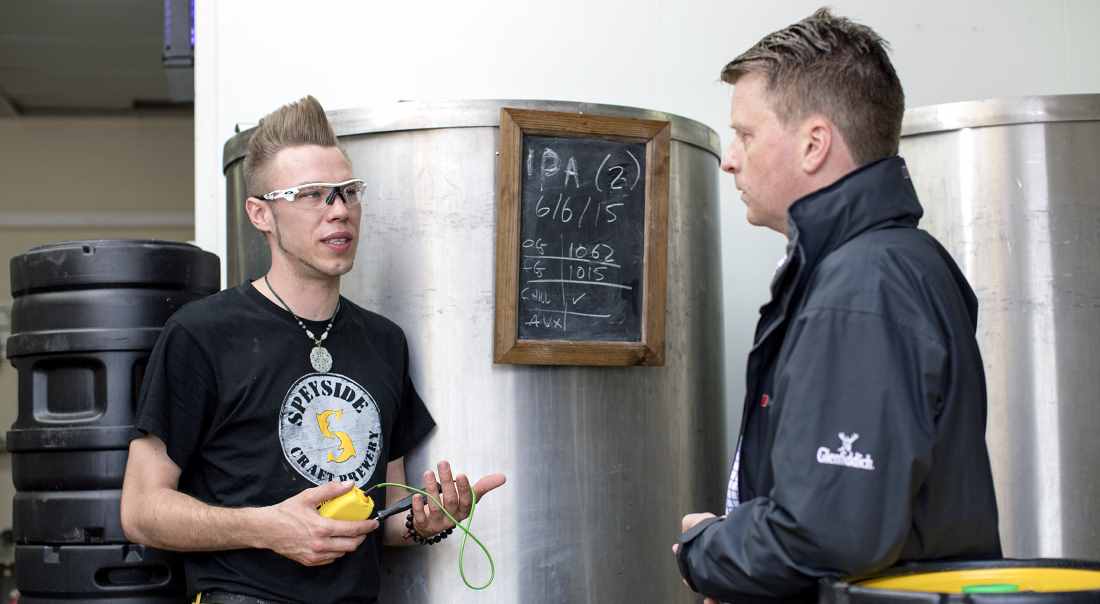 THE WHISKY CHASER has always been a favourite in bars the length and breadth of Scotland – and wherever in the world Scots choose to gather for a tipple.

Now, however, a Moray craft brewery has teamed up with a Speyside distillery to produce a very different twist on the collaboration between Whisky and Beer.

Speyside Craft Brewery and global whisky giants Glenfiddich are collaborators in a new experimental range that will see a new range produced – including whisky flavoured by maturation in casks that have held IPA beer created in the Forres brewery.

Speyside’s managing director Seb Jones and his head brewer Adam Blackwood have been working behind the scenes with Glenfiddich’s master blender, Brian Kinsman, for the last 18 months to create the right beer to flavour a selected single malt whisky.

It is a process that involved creating three separate beers of different strengths and levels of hops. Up to nine freshly-emptied American oak casks at a time were filled with the experimental IPA, varying the time it spent penetrating the oak before emptying the beer and re-filling them with whisky.

Seb says that for the brewery team the recipe formulation was a key part of the process, adding: “Adam and I worked closely with Brian and his team to get the flavour profiles right.

“It’s a process you can’t hurry – some of the casks sat with the IPA in them for months to make sure the flavour of the beer penetrated the casks to right level. It couldn’t be allowed to dominate the whisky but had to bring something extra to it.

“It’s been a testing time for the team but an enjoyable challenge. Working with Brian and his team has been a real privilege, and we’re delighted to be part of this radical new range.”

Three variants of the beer have been produced in the search for the optimum recipe match, most of which had to be discarded once the recipe was approved.

The partnership between Speyside Craft Brewery and its giant neighbour began 18 months ago with a phone call from Seb to Brian, expressing interest in a collaboration. The timing could not have been better as Glenfiddich were at the early stages of planning a radical new range of whiskies, seeking to work with creative mavericks in the food and drink industry to create new flavours.

Seb explained: “I called Glenfiddich’s head office and left a message for Brian, and thought no more about it until a week later when he called me back.”

Brian said that the call out of the blue from Seb was real serendipity: “The idea behind the Glenfiddich IPA Experiment was quite unusual but one we were passionate about.

“We wanted to play with flavours to see what we could create. Using beer somehow was part of the plan, and fortunately we had the call from Seb. When I called him back it was clear he shared our passion for creating innovative favours, taking risks and pushing boundaries.

“We worked together to pioneer a new single malt scotch imbued with zesty citrus and tangy hops from the oak casks that had previously held a bold, new Speyside IPA. This took us to new levels of experimentation in a way no distillery has ever done before.”

The IPA Experimental whisky will be launched worldwide this month with Seb taking part in these events in cities around the globe.

The 6% ABV IPA beer will be available from Speyside Craft Brewery by December, with primary focus on exporting to many of the 184 countries where Glenfiddich whisky is sold.

Extra capacity is being developed at the brewery to meet the anticipated demand from global sales.