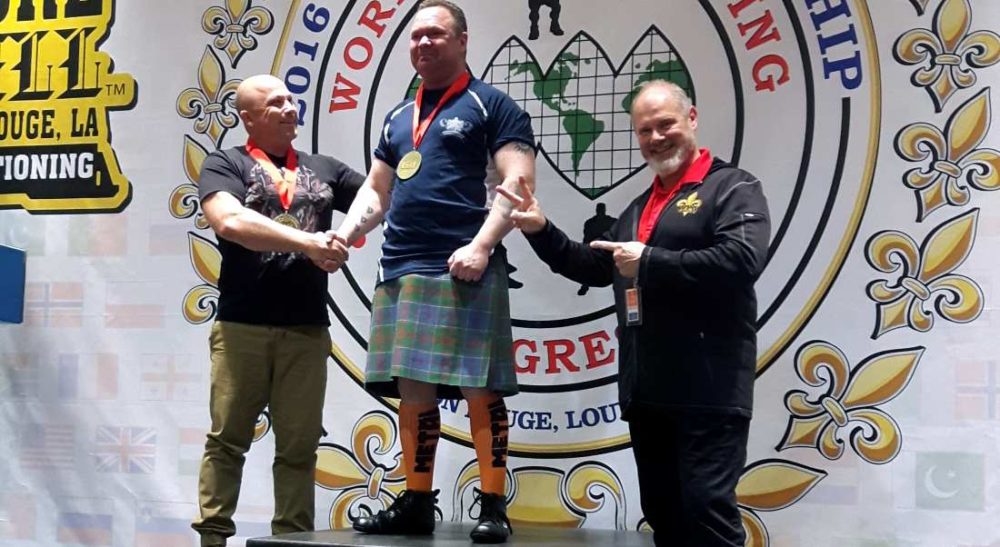 A SPEYSIDE CHEF has cooked up a storm at the world powerlifting championships where he picked up two gold medals – and smashed two records in the process.

Neil Stewart made the podium at the championships held in the United States from where he also returned as the British record holder in the deadlift event.

Neil did not have long to bask in the glory however – as he was quickly back at the Station Hotel in Rothes to take on the early morning shift as breakfast chef.

The new world champion was happy to do so however – after all the Hotel provides sponsorship towards his training and travel costs as well as being flexible with rotas so that he can prepare for his sport.

After flying out to Louisiana with the rest of the Great Britain squad, Neil achieved an opening bench press of 157.5kg, and followed that up with a second round lift of 162.5kg before clinching gold with a 172.5kg effort in the final round.

He then opened his deadlift account with 257.5kg, before setting a new British record in the second round with a 265kg lift – 5kg more than the previous record. He smashed it again to win the gold, achieving 270kg with his third round attempt.

Neil, who lives in Aberlour, said: “It’s just an amazing feeling, and considering I only started competing three years ago I never expected that I would become a world champion.

“I had hoped to get 180kg in the bench press, but I was affected by jet lag and had accumulated water weight from the flight so had to make a weight cut.

“I was really happy with the deadlift, especially because of the pedigree of that competition. To win, I had to beat the captain of the Russian team who is also the president of the Russian Powerlifting Federation.

“I would never have been able to do this without the support of the hotel and their understanding with my training and competitions. It was a really good feeling to come back to work and show them that all their help has not been in vain.”

The next big milestone arrives in January – but on that occasion he will be lifting something much, much lighter. He and his wife, Gaynor, are expecting their first child.

Neil Slessor, general manager of The Station Hotel, says everyone at the venue is over the moon at their chef’s success. “We are so proud of him – we can’t believe that we have a world champion working with us.

“It’s a huge achievement. We had every bit of faith in him to come back with a gold medal for us – and the fact that he’s come back with two is amazing. We’ll continue to support Neil in any way that we can.”

The hotel also sponsors another of its employees – amateur boxer Megan Gordon. The 17-year-old waitress has accumulated a huge number of titles, and hopes to be selected for the Commonwealth Youth Games next summer.