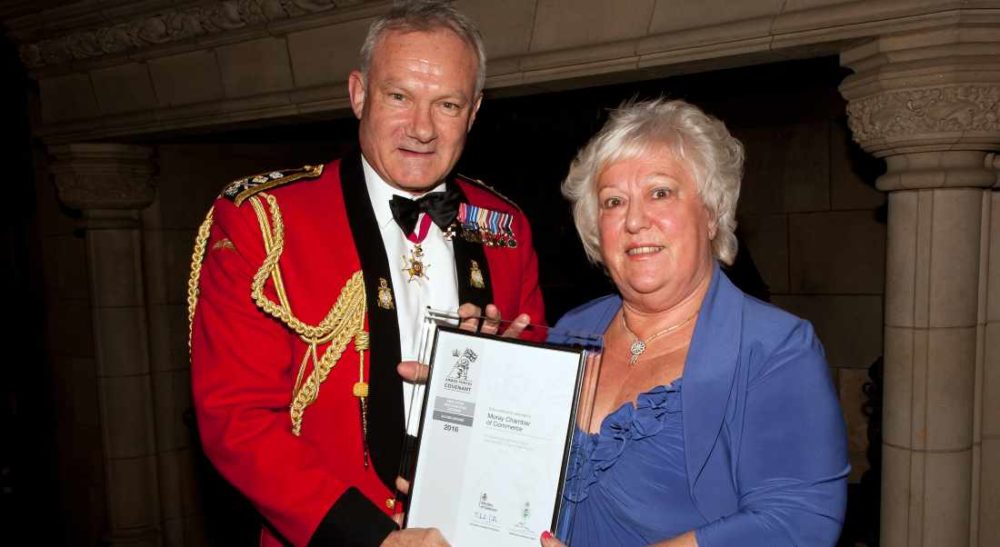 MORAY COUNCIL WERE joined by the Moray Chamber of Commerce this week in being acclaimed for their support of the UK Armed Forces.

They were amongst 22 employers from around Scotland invited to a glittering reception in the Great Hall of Edinburgh Castle.

The reserve forces employer awards dinner was held to award employers for their supportive attitude towards the Armed Forces over the last year. The main part of the evening provided an opportunity to publicly acknowledge employers who support the Armed Forces through employing reservists, veterans, disabled veterans, Cadet Force Adult Instructors or the spouses of members of the Armed Forces.

The Employer Recognition Scheme is awarded at three levels – the Bronze award can be gained by signing an electronic pledge on line, the Gold award is presented nationally in London – but the Silver awards presented on this occasion are decided regionally.

Employers can be nominated on line by anyone who believes that the company or organisation satisfies the criteria. Once nominated a regional board determines which of the nominations will go forward to receive the award.

In Scotland a total of twenty-six were made this year, however not all were able to accept the award at this reception.

Receiving the award on behalf of The Moray Council was former serviceman Councillor Chris Tuke, who commented: “We have a good number of service spouses and ex-service personnel working for the council along with a number of Reservists, from which we all benefit.

“Additionally, working alongside them gives us a better understanding of military life and the issues that families face. The council has always worked closely with our local armed forces in all matters, and to receive recognition of this relationship is very welcome.”

The Vice Chief of Defence Staff General Sir Gordon Messenger KCB DSO OBE ADC, presented employers with Silver Award certificates on behalf of the Secretary of State for Defence, after which he spoke to the gathering about the value of reservists in the workplace and the additional skills and training they bring to employers through their military service.