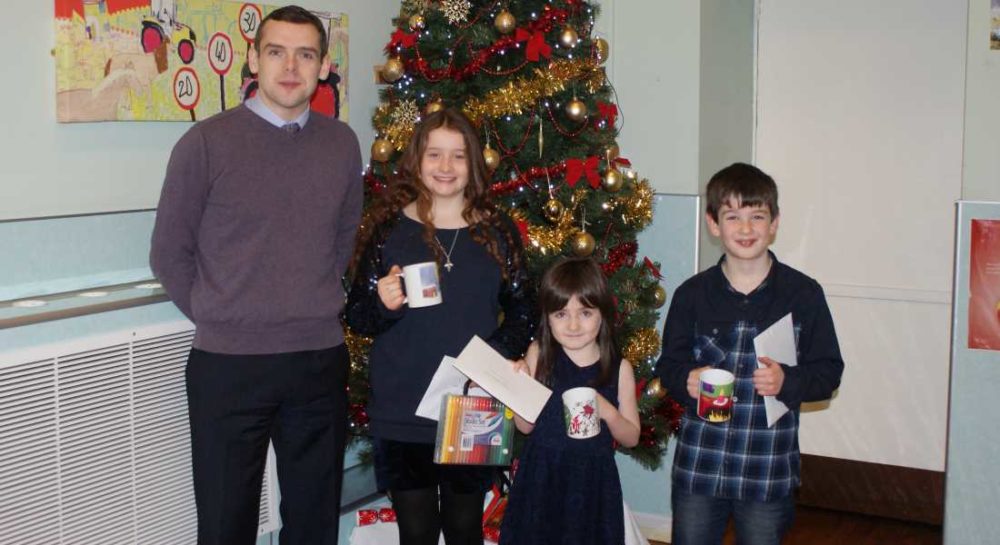 A SPECIAL MORNING ASSEMBLY ahead of the Christmas Party at Alves Primary School was held on Monday to reveal the winner of a regional MSP’s first ever card competition.

Douglas Ross MSP visited his former school where he had earlier decided to run a competition for his official Christmas card design.

The lucky winner was a very talented 11-year-old, Niamh Strasdin, who was presented with an art set as well as a mug emblazoned with her winning design. Runners-up in the competition also received a mug with their design, with all receiving a family ticket to visit Morayvia and some Thornton’s Chocolate.

Mr Ross said: “I was delighted that the School agreed to take part in my first Christmas card competition since being elected to the Scottish Parliament back in May. Having attended the school myself from nursery right through to primary 7, I really wanted to make this first competition special by inviting my old school to take part.

“The standard of entries across all age groups was amazing and it was a very difficult job trying to pick who should be the winner, with all the pupils being winners in their own right.

“After much deliberation we agreed the drawing by Niamh would be the winner for Christmas 2016. I was impressed by the detail she included with Santa and his sleigh in the sky and a snowman and Christmas tree included as well.

“With the paintings and drawings being of such a high standard I also picked two runners-up, eight-years-old Oliver Morgan and six-years-old Cerryn Michie.”