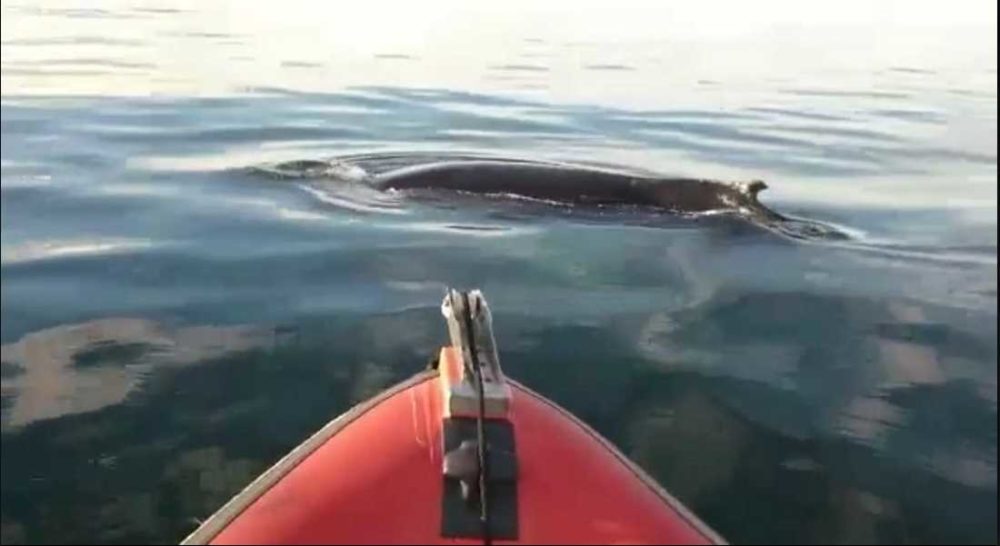 MORAY CONTINUES TO BE GRIPPED by the arrival of two visitors who it is now hoped will provide a massive boost to tourism for the region.

The pair of Humpback Whales caused a storm throughout the country following insideMoray’s news item on Monday that thousands had been lining the shore from Burghead to Hopeman to catch sight of the visitors.

It is now believed the two Humpbacks are a mother and calf who had previously remained just off the coast of Aberdeen for around three months – sparking hope that the pair will remain in place off Moray for at least as long.

First spotted by WDC Shorewatch volunteer Steve Truluck from his home in Hopeman last Friday, the pair were still attracting dozens of people to the shoreline even in poor weather yesterday – and again, the whales did not disappoint as they made an appearance.

Mr Truluck said: “It was a tough day today with the weather – strong wind, stinging rain and cold, but eventually we managed to spot the Humpbacks.

“They had moved back east just off of Hopeman – the Gannets as usual were giving the whales’ position away, but as hard as we monitored the Gannets we just couldn’t see the whales for hours.

“Then the rain came – but a move from the visitor centre to Hopeman Harbour wall proved fruitful and the whales were clearly visible to the naked eye from the wall despite the rain, wind and waves!”

Those fortunate enough to spot them were treated to the amazing sight of a rainbow appearing with the whales at its source.

Speaking of the last few days Mr Truluck admitted that the response from the public – which included over 50,000 readers picking up on the insideMoray story – had been ‘insane’: “The response has been insane, we have had hundreds of people lining the coast at Hopeman and Burghead.

“The whales are known to spend about three months in certain places, so we are hopeful they will make Moray their home for a while.”