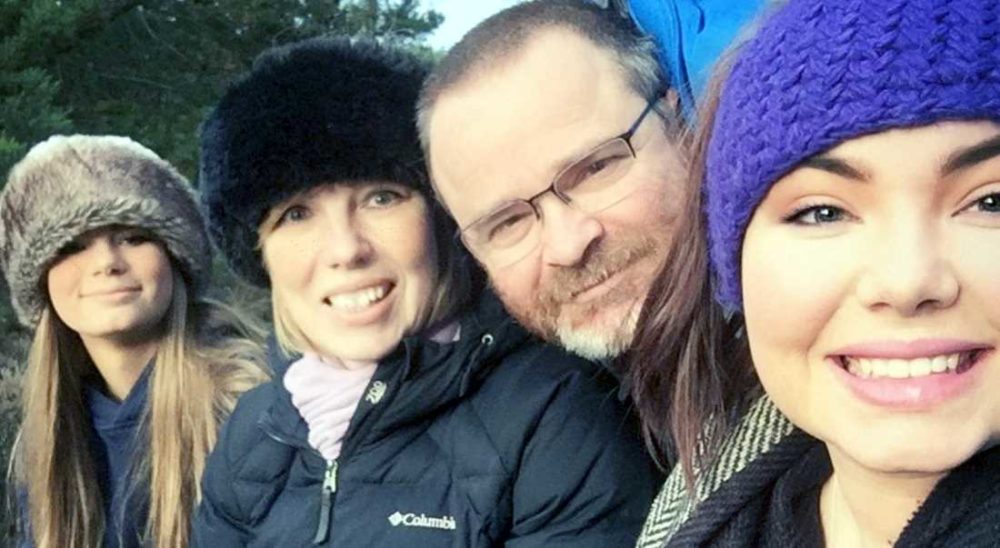 A MORAY FAMILY are entering the new year with new hope – and a determination to raise awareness on the lifesaving nature of organ donation.

Lossiemouth mother of two Gill Redmond was devastated when she learned that husband Mark was seriously ill following kidney failure – and the fact he faced life on dialysis unless a transplant became possible.

Gill stepped forward to offer one of her kidney’s for transplant – and six months on from the surgery that changed Mark’s life, both he and Gill are set to take part in the Etape Loch Ness cycling event in April.

“To be honest, I’m more petrified about this than I ever was about the operation,” Gill explained, adding: “But we are both determined to complete it to show that there is life after a transplant.

“What this whole experience has taught us is that you only have one life, you have to crack on and pack as much into it as possible – and not waste any opportunity that comes along.

“A year ago, it would have been inconceivable for Mark to have considered doing this. He had been such a fit guy and all of a sudden he was lying on the sofa sleeping for hours a day – it was such as shock to see him like that.  This was a no-brainer for me. We encountered a problem and we needed a solution – I had the solution that could fix the problem.”

Mark first became aware of a kidney problem during a routine medical in 1995. He was in the Royal Air Force at the time, flying Nimrods out of RAF Kinloss, and was diagnosed with Berger’s Syndrome.

Although it did not affect him at the time, he experienced a drop in kidney function about seven years later and it became difficult for his kidneys to flush out toxins. His condition gradually deteriorated to the point where he was told dialysis or a kidney transplant was his only chance of survival.

Gill and daughters Neve, 18, and 15-year-old Katie-Anne noticed a huge change in his health, he was constantly tired and listless and had no energy to enjoy activities with his family. By this time he had retired from the RAF and was working in Aberdeen in the oil industry, but was unable to complete his daily commute without stopping off for a nap in the car.

Doctors told Mark that a kidney from a sibling was his best chance of finding a match, as an only child this was not an option. This was when Gillian – his wife of 26 years – asked doctors if she could be considered as a donor.

Mark said: “It was initially very hard for me to accept. I did not want to have a kidney from Gill because I did not want to put her through any unnecessary suffering or put her at risk. It took me quite a while to get my head around the fact that Gill wanted to do this.

“My doctors at Aberdeen Royal Infirmary – who I have to say, along with all the medical professionals we have encountered in the NHS, were absolutely outstanding and for whom I have nothing but praise – convinced me that there were no risks to Gill other than those normally associated with any kind of surgery.

“As long as there are no underlying health issues which would result in extra strain being put on the body, one kidney is perfectly adequate. It is also generally felt that a transplant from a live donor has a better chance of success than from someone who is deceased.”

Gill and Mark have since been able to convince over 40 members of their family and friends to sign up for the national organ donation register, and hope that by taking part in Etape Loch Ness they will be able to highlight the critical shortage of organ donors.

Mark added: “I am so looking forward to Etape Loch Ness – I’m not interested in the time we do, just that we finish it and we finish it together.

“This time last year I could not even drive 60 miles, so it’s incredibly emotional for me to think that in a few months I will be cycling over 60 miles in one of the most beautiful places on earth.

“Transplants not only save lives, they change lives. If one person consents to organ donation when they pass away, they can benefit seven other people. That’s seven lives that can be completely transformed.

“I hope that Gill and I can encourage people to talk about it with their families, and to take that step to register. You can do it in the time that it takes to boil the kettle to have a brew. That’s how easy it is to save a life.

“It’s not just middle-aged men like me they could be helping – it could be a new born baby, a child, a young parent. I was so fortunate that everything fell into place for me, and Gill wanted to give me a kidney, but so many others are not so fortunate.

“Thousands of people are on waiting lists – some for as many as 10 years – waiting for the call to come that could save their life.”

Anyone who would like to know more about organ donation can visit www.organdonation.nhs.uk for further information.