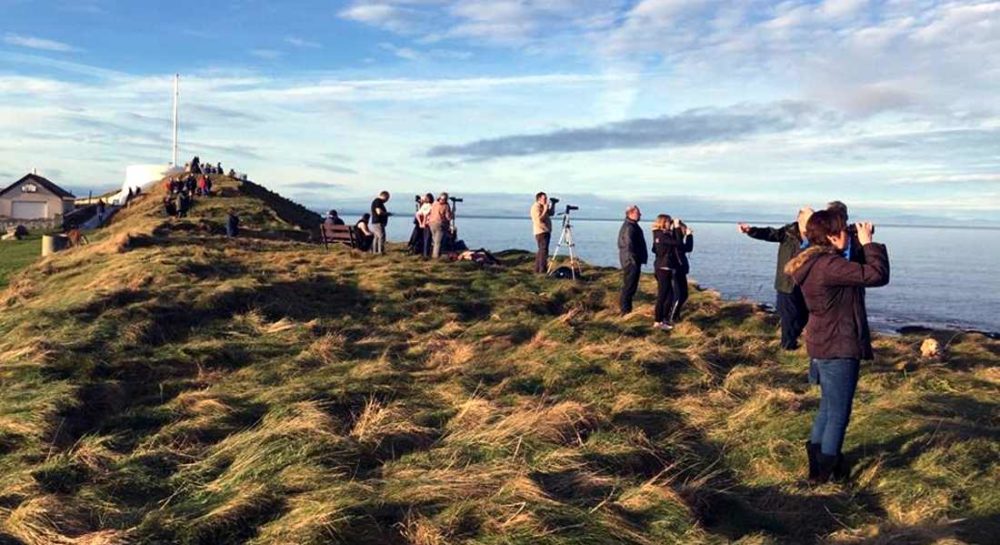 HUNDREDS OF PEOPLE have been enjoying one of nature’s greatest gifts to Moray over the weekend – a visit from a pair of Humpback Whales close inshore from Burghead to Hopeman.

First to spot the whales was WDC Shorewatcher Steve Truluck,who saw them on Friday while out feeding birds: “I spotted one breaching several times, it was stunning – I posted my sighting on Facebook and since then literally hundreds of people have been out watching them over the weekend.”

Steve recognised the need to publicise the event as quickly and widely as possible: “As a WDC Shorewatcher I wanted people to see them and appreciate what we have out in the Moray Firth.

“I’m absolutely overwhelmed by the number of people who have been out spotting them and who have given donations to WDC as a thank you for alerting them and so giving them the opportunity.

“The icing on the cake came when Simon Paterson of North 58 Sea Adventures offered to run two impromptu trips out to see them with all proceeds going to Whale and Dolphin Conservation (WDC). On the second trip, Simon stopped the boat short of the two whales in accordance with watching guidelines, and one came over to see us.

“At one point it went beneath the boat – it circled us for a few minutes before going on its way, it was a truly unforgettable experience.”

The whales were spotted again on Saturday from the vantage point at the Burghead Visitor Centre – sparking another social media frenzy as the news spread quickly throughout the region, prompting hundreds to return on Sunday in the hope that they, too, might catch a glimpse.

They were not to be disappointed as the whales returned to the same spot – and nature provided a double dose of good fortune with spring-like weather making it a day to remember.

“The sun shining brought several hundred people to the shoreline all the way from Burghead to Hopeman,” Thomas Gorman told insideMoray, adding: “There was also a number of boats taking people out to have a closer look.

“The whales have been clearly visible with the help of binoculars – and for many of those watching it was the first time they had ever seen such a sight just off our own coastline.”

Visits by Humpbacks are become more regular along the Moray shoreline, in particular since their appearance in 2011 sparked national headlines. A spectacular image of a breaching whale on the Moray Firth sparked further frenzy two years ago, while they also entranced visitors to the area when they were again spotted in August last year.

The regular presence of Humpbacks alongside the resident Dolphin population has been used by campaigners as reason enough to halt plans to begin ship-to-ship oil transfers on the Moray Firth, with the Cromarty Firth Port Authority expected to reveal their latest intentions for that later this month.