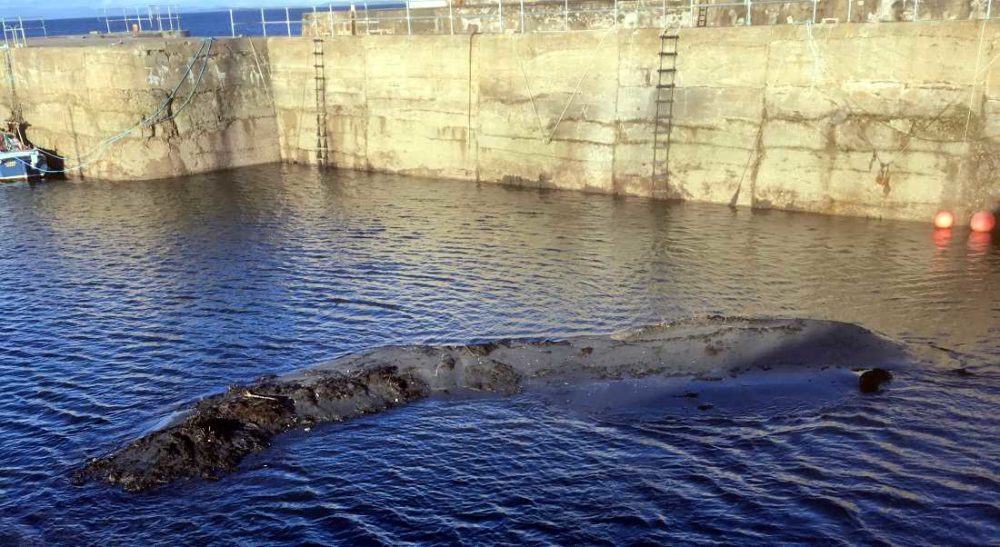 MORAY COUNCIL HAS insisted that a bank on the mouth of the inner harbour at Hopeman left behind after the dredger Selkie is of little concern.

Harbour users have drawn attention to the bank, saying that it is causing difficulties for vessels entering and leaving the harbour. Some have insisted that the reason is the vessel does not have what they describe as a “vital” piece of GPS equipment to guide the dredging operations.

However, when shown the image and invited to comment a spokesman for Moray Council denied it was an issue, saying: “As harbour users know, a full dredge of Hopeman will take at least two Spring tides to complete.

“Selkie will return when conditions are right, as planned. It doesn’t require a GPS system to dredge small harbours.”

Hopeman user Ian McCulloch praised the efforts to get the Selkie into the harbour – the Council had previously expressed doubts that the dredger would be able to do so before their successful entry into the inner harbour in January.

He was not convinced, however, that a GPS Dig Indicator was not required, saying: “At the moment the poor digger driver has to dig blind due to not having a piece of GPS equipment that sits on the pier and tells him where exactly he has been digging .

“It is due to the lack of this piece of equipment there is a great big bank of mud left quite high at the exit from the inner harbour which is causing difficulties for boats entering and leaving the inner harbour.”

Another user challenged the Council over the entire process, pointing out that when launched the local authority appeared to describe just the type of GPS system required being described as already on the dredger.

Robert Stewart said: “It’s the usual line from Moray Council to buy time. As you can imagine it is not possible to see the bottom of the harbour if the mud is all stirred up after a couple of scoops of the digger – so you are in the dark as to where the bucket is actually going and can actually just dig big holes around and about.

“The system described at time of launch was said to be a computer grid system where every time the bucket hit bottom it marked a tag on a grid screen so the driver knew exactly where to place the next bucket and so on. This was said to be GPS assisted to maintain accurate removal of the bottom structure as required.

“This makes very good sense and to deny the need for this equipment is in my view plain stupid, after all why waste diesel paid for by the public coffers to dig a hole in and around the same place.

“Whether or not the harbour is big or small it makes no difference, after all a surface area requires to have its boundary identified to save missing out parts and deepening others as can be clearly seen in this picture in Hopeman harbour.

“It was said this dredger would be hired out to other ports to make money for the council, so what are other paying customers going to say about patchwork holes in the bottom of their harbour and pay money for it?”

Councillors will discuss the Selkie’s first year at a meeting of the Moray Council audit and scrutiny committee tomorrow.