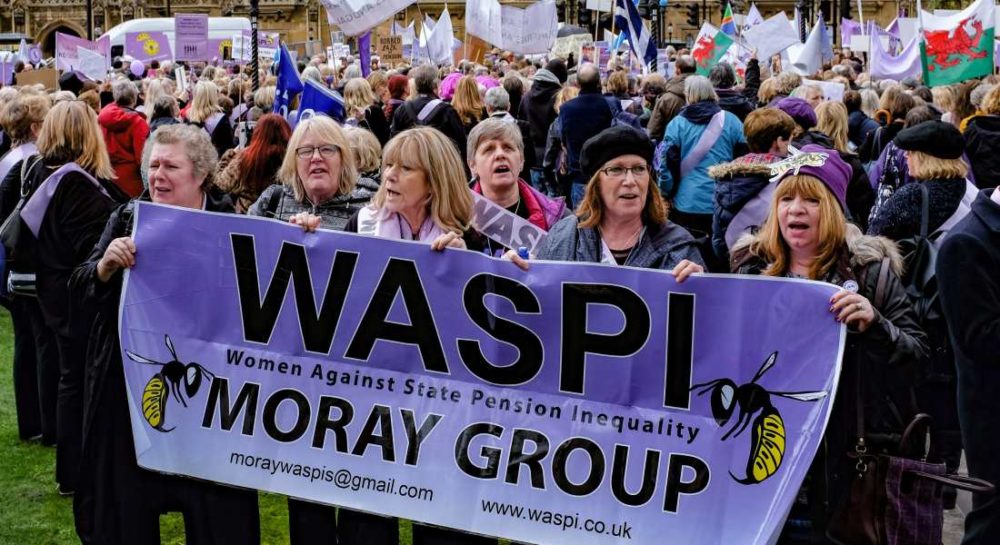 WE PAID IN – YOU PAY OUT – a chant that rang around the halls of Westminster last week, voiced by thousands of women pension protestors – many of them from the very vocal and active Moray WASPI group.

While most of the headlines on Budget Day revolved around increases to duty on spirits and an attempt to hit the pockets of the self-employed under the guise of ‘equality’, the six thousand angry pensioners with supporting friends and family were determined to make their voices heard.

It was, of course, a peaceful protest as you would expect from predominantly women of a certain age. That should not, however, disguise the anger of the 6000 present and many more around the country who believe the ‘transitional arrangements’ to be wrong, those that saw their expected retirement after a long and productive working life stripped from under their feet in their closing working years.

Of course there was the customary support from ‘celebrities’ such as Peter Stefanovic and Martin Lewis, along with the arms of SNP politicians around shoulders offering reassurance that they, at least, understood the cause. And but for a little matter of being outnumbered by Tory MP’s who cared little about their just cause, they would love to have made a difference.

Sheila Forbes, co-ordinator of the Moray WASPI group, admitted it was a day of emotion – but pride that so many gave so much to make their voices heard: “It was very emotional to take part in such a large gathering of people who recognise the devastating impact that the lack of notice of pension age changes has had on lives.

“The majority of women there were like me in many ways, they too had worked hard all their lives, had scrimped and saved and brought up their families through bad times and good only to find that the lack of notice about these changes has destroyed their retirement plans and left many in real financial hardship.

“It is fitting that it was also International Women’s Day which is a good time to take stock of the achievements of women but also to consider the barriers and issues still facing them. This is an issue which affect millions of older women in this country and one that needs to be urgently addressed.”

But from those who can really make a change there was – nothing. Even the normally vocal and some might suggest rebellious Douglas Ross MSP has had nothing to say in support of the women.

The ruling government have made their play, set the rules and will not budge one iota. You have to admire, then, the determination and pride in which these ladies marched on Parliament – and it reminded those with a historical bent of the same pride and determination shown by another generation of women, the one that had been denied the right to determine their future through the ballot box.

They, too, were bullied, humiliated, misreported, attacked and, in the end, even incarcerated in prison for daring to challenge. They too were told they did not have a case, give it up you can’t win – until, ultimately, they won.

We Paid In – You Pay Out – this is not a fight about a benefit, it is a fight about what is the right thing to do, of a Government promise made through a lifetime only to be broken in an altogether bullying manner.

The national WASPI campaign is asking the Government for relief from the changes that have seen many women’s pension age rise twice, taking it from age 60 to 66, with little time to prepare and make alternative financial arrangements. Is that really too much to ask of any Government?

Local 1950s women can find out more about the campaign and how they can support by emailing moraywaspis@gmail.com or by visiting the WASPI website at www.waspi.co.uk.

In addition, the Moray WASPI Supporters Group is holding a meeting on Saturday, March 18 at 3pm, at the Elgin Youth Café, St Francis Place, Elgin. Any woman affected by these changes is welcome to attend.