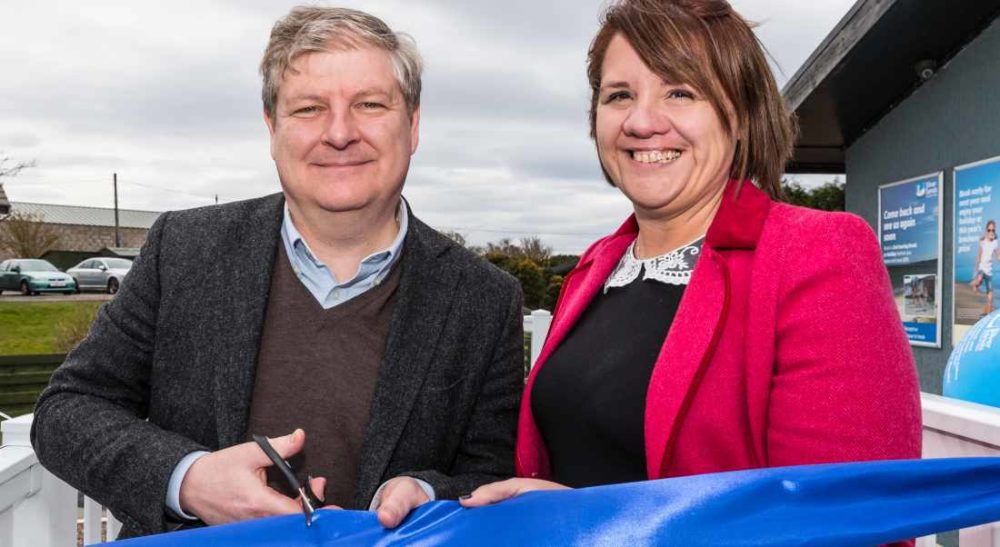 THE SUMMER HOLIDAY SEASON was officially launched at a Moray holiday park at the weekend – with the assistance of local MP Angus Robertson.

Mr Robertson visited Silver Sands Holiday Park for launch event that was part of Scottish Tourism Week, celebrating the vibrancy of quality of tourism in Scotland.

Taken on a tour of the facility by general manager Rebecca Grant, the MP saw for himself the results of a £1million investment over the last two years, aiming at improving the infrastructure and adding new caravan pitches to the site.

“Under previous owners the holiday park’s reputation suffered but it is certainly getting a new lease of life under the new management – and the work that has been done has really improved the facilities and made it very attractive to those choosing to visit. “Bridge Leisure are predicting a record year at Silver Sands following their investment in facilities and additional pitches and that is very good news for other local businesses who will benefit from tourism spend, which supports thousands of jobs right across Moray.”

A growing trend to spend more holidays at home in the UK rather than travelling overseas has prompted confidence in the industry, a point Rebecca Grant made when saying: “The staycation trend of recent years has seen both holiday bookings and holiday home ownership grow, and we think that 2017 is going to be another record-breaking year at Silver Sands.

“We were delighted to officially start our season with a visit from Mr Robertson and to be joined by so many guests eager to see the changes we have made at Silver Sands.”

During his visit, Mr Robertson also met team members who are celebrating the success of Bridge Leisure Parks being named one of the UK’s best employers.

Silver Sands team members were among more than 270,000 employees were asked for their views about their employers and their working environments, helping to create the final rankings for the prestigious list.

The company employs over 40 people at the Lossiemouth site which is ranked 82 on a national list.