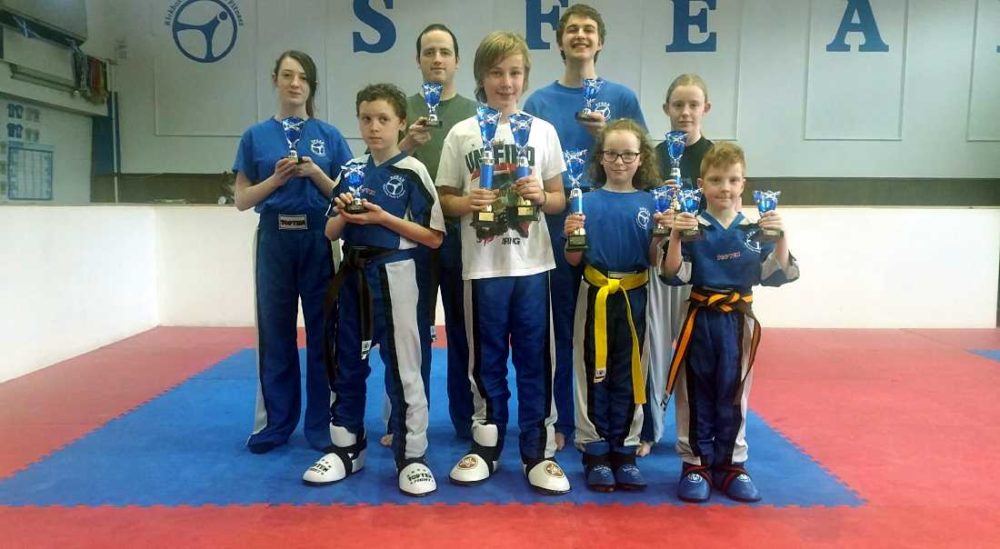 MORAY’S GROWING REPUTATION as a centre of excellence in competitive Martial Arts has been further enhanced by the clutch of medals from members of the SFEAR Kickboxing centre in Lossiemouth.

Youngsters attending the centre recently travelled to the Scottish Open & Qualifiers organised by the World Union of Martial Artists (WUMA) in Arbroath.

It proved a stellar trip for Lossiemouth High School pupil Rebecca White, who took gold for her first place in two disciplines – points and light contact. There was also a first place for Hythehill Primary pupil Nathan Fletcher in the points discipline – and the P7 pupil added a sliver in the light contact class.

There was also silver in the Ladies Points for Lahra Gauld – and in the light contact for Robyn Collier, a P3 pupil at Hythehill who gained a second podium finish with bronze in the Points. Other successes for Hythehill pupils came through Troy Collier’s bronze in points and Oliver Sheville, a P1 pupil who again took bronze in the points. SFEAR’s Jason Fletcher told insideMoray: “It was quite a spread of ages in our team there – which was pointed out by one of our clients as being a very positive thing to see in the sport.

“Next up for our members is the Aberdeen Open on April 30 – that will be a much tougher test with competitors coming from the United States and Europe as well as the UK.”

Looking back on the last 12 months, Jason has every reason to believe that SFEAR is moving in the correct direction: “We had six fighters who qualified to represent Scotland at the WKA World Championships at the end of last year – so progress has clearly been made, but there is plenty of work going on to help us reach this stage.”

You can keep up to date with progress or learn more about SFEAR online.