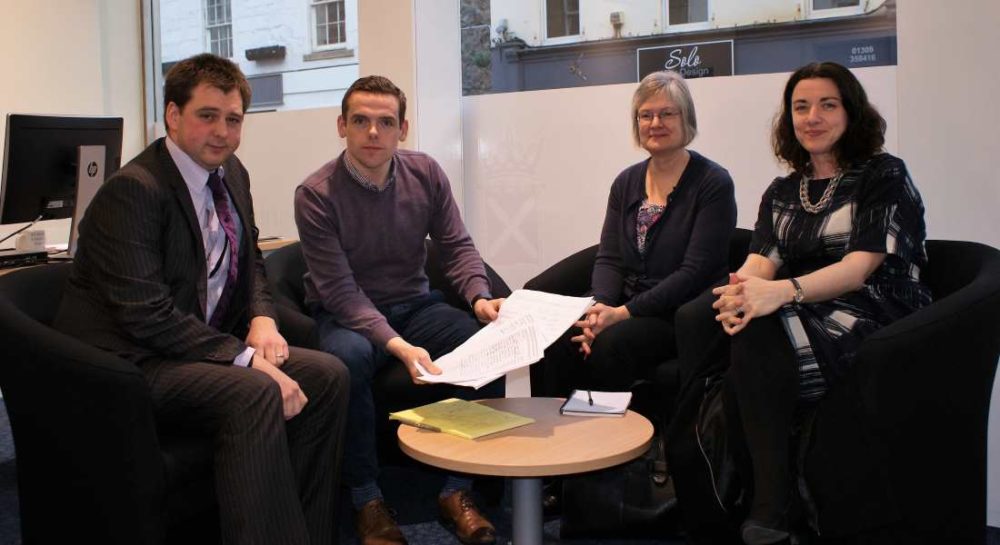 PROTESTS OVER THE complete withdrawal of a bus service providing the only public transport link from Kinloss Barracks, Kinloss Village and Findhorn have fallen on deaf ears.

Stagecoach held a public event in Elgin last week were hundreds protested against the planned changes – with the company saying that they would consider the matter after that consultation closed on Friday.

However, it has emerged that Mark Whitelocks, the managing director for Stagecoach North Scotland, has made it clear that the intention remains to withdraw Service 36 to Findhorn from May 1.

Mr Whitelocks attended a meeting last Friday brokered by Douglas Ross MSP. They were joined by Ruth Douglas, the Barracks Staff Officer for 39 Engineer Regiment, and Claire Fever, who is the Scottish Conservative candidate for Forres in May’s council elections.

Mr Ross said: “Emotions have been running high across Moray and with the very short consultation period coming to an on Friday, I felt it important to meet face to face with Stagecoach and hand over petitions which were signed in my office and other venues in Forres – including the Highland Hospice shop who asked me to present the names they had gathered as well.

“I’m grateful to Ruth Douglas from Kinloss Barracks for making herself available to represent the many servicemen and women and their families who along with the communities of Findhorn, Kinloss and Forres will be greatly affected by these service cuts.

“The 36 service is for many in the community a lifeline, and its cessation will have a very significant impact on the ability for people to go about their daily lives, be it travelling to work or college, or for those who rely on it to attend medical appointments.”

The MSP asked Mr Whitelocks directly if Stagecoach would consider at least a pause in their plans, allowing a look at possible options – something the managing director promised to consider. However, just a few days later the news related to Mr Ross was not good.

He said: “Unfortunately, he has now come back to me to say this is very unlikely and while the company are still looking at all the responses, their intention is to end these vital services from the 1st May.

“I will be speaking with the council again tomorrow to consider what can be done to ensure these lifeline services are not withdrawn completely. The people of Moray have made their opinions clear, both at the event in Elgin on Tuesday and those who have signed the numerous petitions which were set up.

“I’m concerned that if Stagecoach do forge ahead with their plans without even pausing to reflect on the consultation then it’s quite clear that their reputation will be severely tarnished by holding what will in effect have been a meaningless exercise if they don’t listen to local people.

“Individuals and communities have given up their time and energies to feedback their views on the proposals and I’m worried that whilst listening to the concerns, Stagecoach seem unlikely to act upon them. Stagecoach and the council need to explore every avenue open to them with regard to maintaining these services.”

Ruth Douglas added: “I am grateful to Mr Ross for being able to convene this meeting at very short notice and allow me the opportunity to put forward the views from the Barracks. With almost 3000 people living in the Findhorn/Kinloss area the community’s views must surely count for something.

“The cuts to this service will have a considerable impact on our service families. With many of the personnel at the Barracks coming from down south, they often have no extended family nearby to support them.

“Access to Forres, Elgin and wider Moray is therefore incredibly important and it is deeply concerning to think that our families, along with the residents of Findhorn and Kinloss will be isolated unless fortunate to have access to a vehicle or indeed able to afford to pay taxi fares on a regular basis.

“We face a logistical nightmare for our families who use the bus to access employment, medical appointments or college. These changes will come at a time when some of our young people are sitting exams and will be under enough stress without the worry of how they will get to and fro.

“Like Mr Ross, I too hope that Stagecoach will listen to the views which have been echoed across the region and work to protect this lifeline service.”