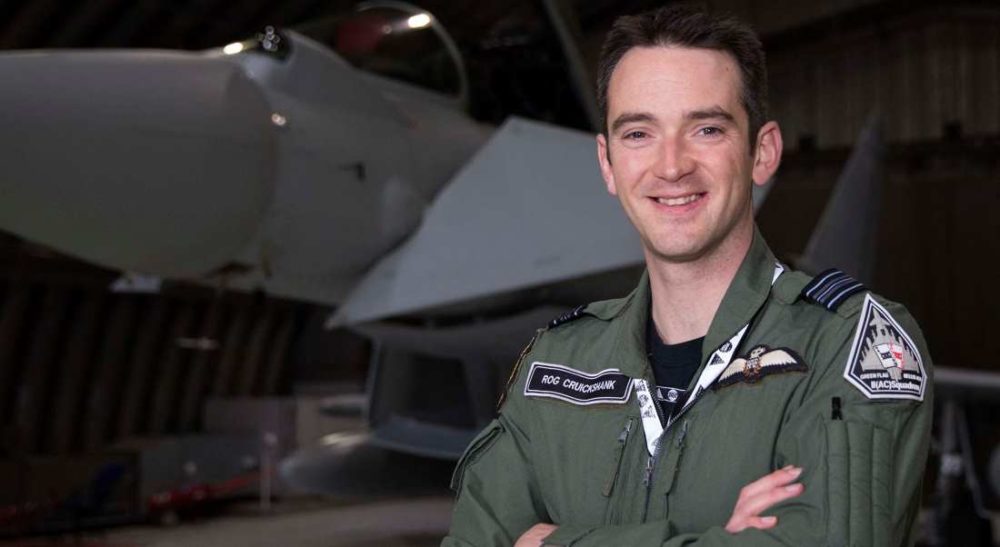 AN RAF LOSSIEMOUTH flyer who has led an already remarkable life has been awarded the Distinguished Flying Cross for actions against Da’esh in Iraq.

Squadron Leader Roger Cruickshank of II(AC) Squadron has received the DFC in the Operational Honours List for “strong leadership in the fight against Da’esh in Iraq”.

Roger was a member of the British Olympic Ski team when he smashed his leg in a fall – endangering both his skiing and RAF careers. He fought back, however, to compete in the Olympics – but later suffered horrific facial injuries in a mountain biking accident.

Several years later his mother committed suicide – prompting last year the publication of his book, Speed of Sound, Speed of Mind that told of the amazing comebacks in his life with all proceeds going to mental health charity SAMH and military charity Help for Heroes.

Today it was revealed that the latest chapter in a remarkable life for Roger will be his DFC, earned through an operation on May 27 last year when, while leading his Typhoon formation, Squadron Leader Cruickshank “conducted successful strikes against multiple hostile targets, with repeated exposure to Da’esh anti-aircraft systems.”

His citation added: “He showed phenomenally quick-thinking, supreme technical knowledge and sheer determination to successfully destroy enemy targets while his formation ran critically low on fuel, nevertheless, he still managed to achieve the mission and get his formation safely back to base.”

Speaking about the Honour, Squadron Leader Cruickshank said: “I am very humbled to receive this honour and feel proud to have even been nominated in the first place. However, I sincerely feel that I was just doing my job and in the right place, at the right time.

I have benefited from a supreme training system which set me up to deal with the task I was faced with and feel fortunate to have been given the confidence to cope.

Finally, I must stress that it is hugely down to the team as a whole, the engineers, the survival equipment personnel, the operations staff and many others, who all ensured that I was indeed in the right place, at the right time and able to save the lives of allied personnel on the ground.”