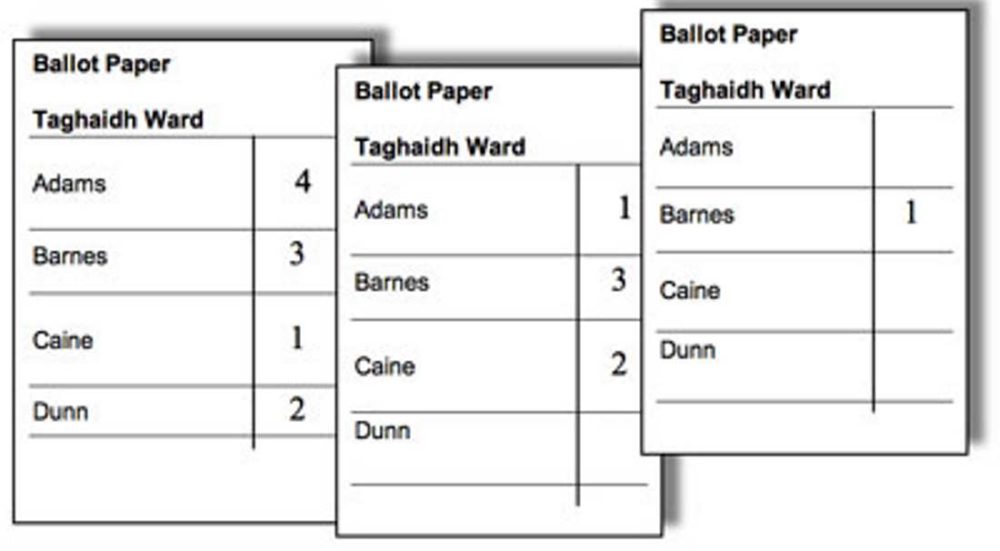 SEVERAL READERS HAVE contacting insideMoray recently and confessing that they are keen to take part in the Council elections on May 4 – but, actually, don’t really understand what is happening.

How is the council formed? Why is there multiple places in each ward? When I vote, what exactly should I put on the form?

The information is of course out there – but finding it might not be as easy as you think and, anyway, it is not the simplest thing to understand. So here is our quick answers to the questions asked of us so far…..

Why do we have multi-member wards?

Ward boundaries in Moray are decided by the Local Government Boundary Commission. They have decided to split Moray into eight wards. The number of councillors to be elected from these wards is determined on a ‘per head of population’ formula.

So it is not the geographic size of wards that determine the representation on a Council, it is the number of people living in the ward.

The wards in Moray are (number of Councillors in brackets):

See HERE for a full list of candidates in the 2017 Election.

So how should we vote?

The easy answer of course is with your conscience! But of course, when you have that ballot paper in front of you, you must not, as we all used to do, put a cross beside one candidate.

What you do is order who you would like to represent you in order of preference. You then place a number in the box for each of the candidates you choose – the number on the paper will vary from ward to ward. You can place a number beside just one of them – or all of them, that is your choice.

Of course, it MUST NOT be the same number – remember, you are providing an order of preference so it will be 1 for your first choice, 2 for your second, 3 for your third and so on.

So how are votes counted? We use the ‘Single Transferable Vote’ system in Scotland. This uses a formula that is established before the count starts – it is called the ‘quota’. That will depend on how many candidates are contesting and how many Councillors are required for the ward.

The method of counting votes is complicated, and rather than describing it here we suggest you take a look at this page on the Moray Council website – http://www.moray.gov.uk/moray_standard/page_68268.html – where it is explained step by step.

As I say, it is complicated – but if you don’t wish to grapple with it then be assured that, so long as you have placed your preference(s) in order in the proper numerical manner, these preference will be taken fully into account.

How is the Council administration formed?

When the votes have all been counted and the new Councillors revealed, Moray will have 26 Councillors in total.

These Councillors must then form an ‘Administration’ between them – that is, a group that, hopefully by virtue of having a majority (more members than any other single political party or coalition) will appoint a Convener (the civic head of the Council, much like a Prime Minister at Westminster of First Minister and Holyrood).

In Moray the Administration may also appointed a ‘Leader of the Council’ to share the burden of leadership – this happened in Moray for the first time in the last council.

If no single political party has a majority, things become a little more difficult. Individual councillors or groups of councillors then need to negotiate a joint agreement to form an Administration. The last Council in Moray was formed from such an agreement between the Independent councillors and three Conservative councillors.

Of course, in the ideal world political parties will hope to gain enough places to form the Administration – the only such party that has sufficient candidates to achieve that in Moray is the SNP. If, however, they fail to gain at least 13 Councillors, they would have to depend on an agreement with sufficient others to form an Administration.

If no agreements can be reached, the onus could be place on the party or group with the largest number of Councillors to form a ‘minority’ Administration. This can be a very difficult situation, such an Administration will depend on some level of support on a case-by-case basis.

However, whichever way the Administration is formed, it does have the ‘casting vote’ advantage both in Full Council and Committees, where a tied vote would see the Convener (Full Council) or Chair (Committees) having a second (casting) vote.

So negotiations are over and we have an Administration, what now?

The Administration group of Councillors will appoint their Convener, Leader and various Committee Chairs. The Full Council will also be required to approve all these appointments as well as appointments to represent the Council at a variety of outside bodies.