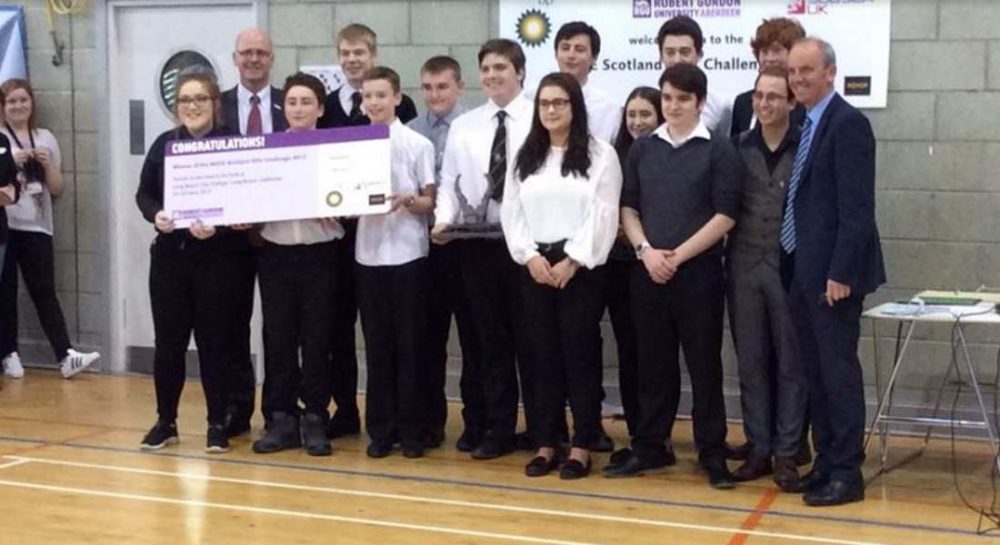 The pupils set up a company, ‘impROVise’, for their entry to a nationwide school challenge to construct a Remotely Operated Vehicle (ROV).

For the challenge they had to set up their own company, including documentation and advertising, then design and create an ROV that would tackle underwater challenges.

Niamh Duncan explained: “Our team was delighted to hear we had won and that earned an elusive place at the MATE ROV international competition, to compete against the best high school engineering teams in the world.

“Our hard work is not over though – as well as continuing to improve and perfect our ROV, named Proteus, we must also raise funds for the trip.

“As a prize for coming first, the MATE Scotland association will cover the travel costs for six pupils and an accompanying teacher. However, our group has twelve members – this means we will require funds to provide another seven people, one adult and six pupils (a minimum of one adult is legally required for every ten pupils).”

The pupils have worked out that £8500 will be needed to cover their costs for the trip to Long Beach in California – and for that they are carrying out a wide variety of fundraising events. They are also using their entrepreneurial skills to attract sponsorship from local companies.

Niamh added: “Company backers can expect their logo to appear on our documentation and displays, which will be seen by hundreds of experts and professionals from the world of engineering.

“Their name would also be laser-cut onto an acrylic puzzle piece, which pieced together will create a mural.”

The highly enterprise project will, it is hoped, produce some long-term benefits as explained by Niamh who said: “In terms of future progression, we would like to encourage the future generation, the youth of today, to take more education courses in the fields of science, technology, maths and engineering.

“We also look to encourage them to participate in the MATE ROV international competition. This would also benefit our resources and our school’s technical department.”

As well as seeking business backing the group have set up a JustGiving page where members of the public can donate – they would also be named as supporters on the planned mural.