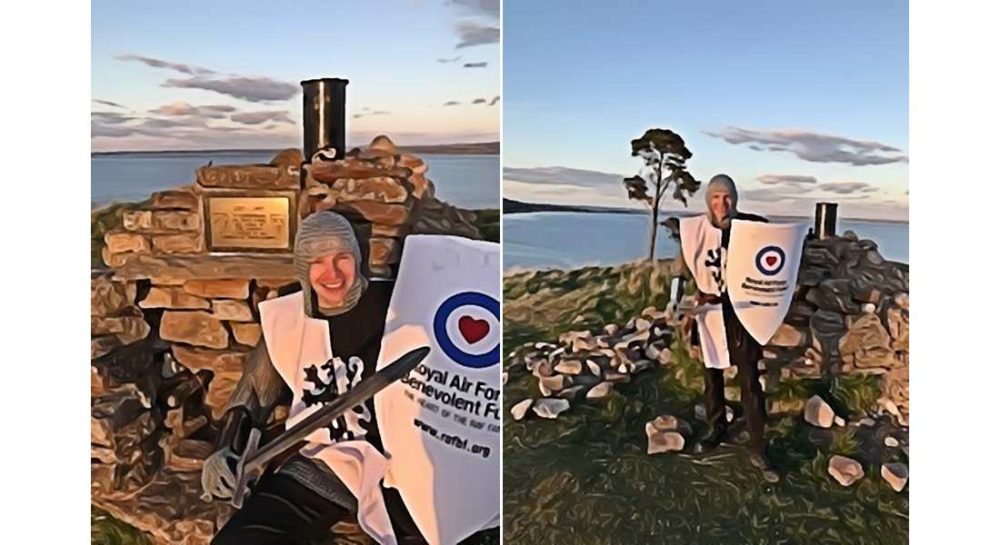 A MORAY BASED RAF Reservist will be looking to recapture the spirit of bravery of a Scottish Knight of old when he takes to the streets of London this weekend.

Andy McMahon, a Lance Corporal with 2622 Squadron at RAF Lossiemouth, will take part in the London Marathon carrying not only the hopes of the RAF Benevolent Fund for whom he is taking part – but also the added burden of lugging 20kgs of chainmail around the 26-mile course.

A veteran of ten marathons, Andy has decided to make his eleventh the most testing yet – by running in tribute to Andrew de Moray from the Castle of Avoch (Ormond Castle). He was famed as being William Wallace’s joint Commander of the Army of the Kingdom of Scotland and fought for Wallace at the Battle of Stirling Bridge.

The Youth Development Officer said: “I ran the Silverstone half-marathon in the same suit in two hours and ten minutes – and I also hold the world record for the London Marathon wearing a general service respirator in three hours and twenty-eight minutes.

“I hold another world record having ran a marathon in full military combat uninform, including body armour, in three hours and forty-nine minutes.”

The current record for running a marathon in chainmail stands at a little short of six hours – and that is the a time that Andy has set his sights on for Sunday’s race.

“It’s all very crazy and a bit of fun – but on the day I hope to be able to channel the bravery and spirit of Andrew de Moray,” Andy said, adding: “My wife Lorraine and daughters Meghan and Taylor will be there at the finish line to pick me up!

“Hopefully everything will go to plan and I’m looking forward to meeting up with the other RAF Benevolent Fund runners for some well-earned refreshments after the race.”

Local RAFBF Champion and fundraiser, Karen Cox, said of Andy’s effort: “It never ceases to amaze me the lengths people go to for charity, but this has to be the craziest challenge yet!

“I will definitely be glued to my television on Sunday, watching out for Andy’s race number, although I am sure he wont be easy to miss!’ ‘It’s always great fun to be able to help support people like Andy, who are doing such amazing things to help support the RAF’s leading welfare charity.”

People in Moray should look out for race number 24574 – although Andy’s attire will not make him difficult to spot on Sunday.

Andy has a JustGiving page for those who wish to recognise his efforts with a donation.