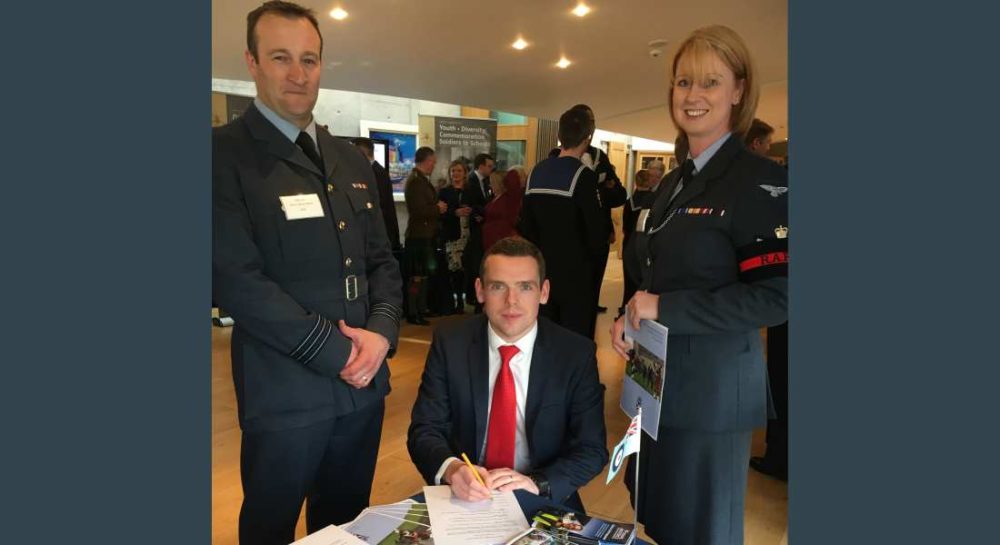 A SCHEME AIMING to promote the Armed Forces to all members of the Scottish Parliament is being backed by regional Moray-based MSP Douglas Ross.

Mr Ross was on hand to welcome current member of the Armed Forces to a reception held at Holyrood last night (Tuesday).

The Scottish Conservative MSP has signed up to a scheme which aims to promote the Armed Forces to all Members of the Scottish Parliament with a series of visits taking place at various military establishments across the country.

Commenting Douglas said: “This is an excellent scheme which demonstrates the valuable work carried out by our Armed Forces.

“I would like to acknowledge the sacrifices that our service personnel and their families make every working day and I am very much looking forward to the visits and learning more about the essential tasks being carried out to keep our country safe.”

As well as visiting Glencorse Barracks in Penicuik to meet with members of The Royal Regiment of Scotland, the MSP paid a visit to Royal Marine Condor at Arbroath to meet 3 Commando Brigade, the Royal Navy’s amphibious infantry.

Mr Ross has also been invited to visit RAF Lossiemouth to meet personnel from the newly arrived Typhoon squadrons, and hear more about the imminent arrival of the new Maritime Patrol aircraft, which was procured by the UK Government and will be based in Moray.

He said: “I very much welcome the opportunity to take part in these visits and am looking forward enormously to going back to RAF Lossiemouth and meeting with personnel there and learning more about the new aircraft.

“The reception in Parliament was a good opportunity to meet with personnel from RAF Lossiemouth and discuss what MSPs will be doing on the visit there later this year during Exercise Warrior, watching first-hand the UK’s largest joint maritime training exercise.”

Speaking on the importance of keeping the military in Moray, Douglas said: “As well as the economic and community benefits which come from having the military and their families based here in Moray, I am very proud to say that I live in an area which has such a proud tradition and still retains a vital place in our country’s military strategy.

“I would like to thank all the Armed Forces very much for the vital work that they do.”