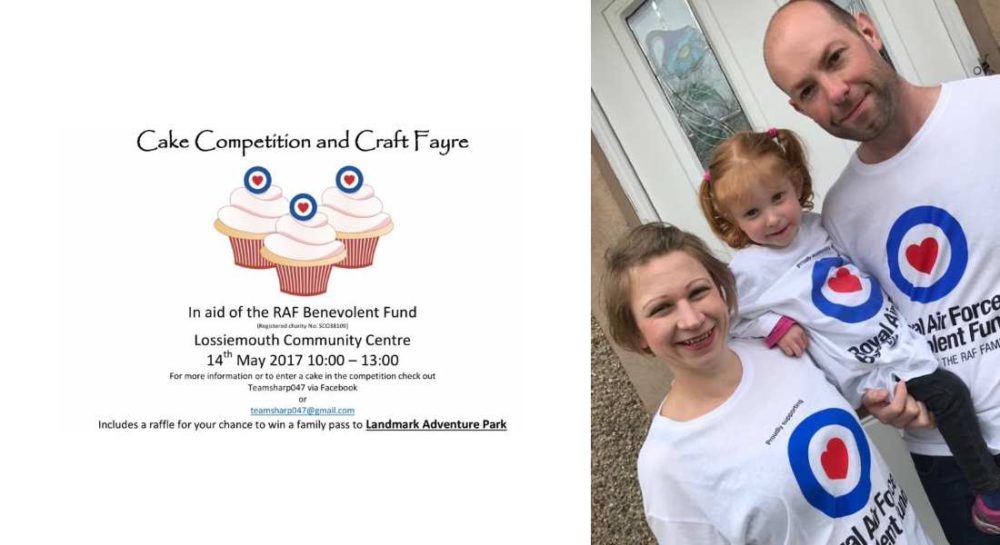 CAKES, CAKES EVERYWHERE – and sweet tooth or not people in Moray are being invited to enjoy the experience while giving something back to a worthy cause.

Chris and Kate Sharp are behind an initiative that they hope will raise funding for the Royal Air Force Benevolent Fund here in Moray.

The pair will be hosting their Cake competition and Craft Fayre in the Lossiemouth Community Centre this week – but they will be very careful not to partake too much in the goodies on offer, as they are also preparing for another massive effort weeks later.

“We are both running events in Edinburgh’s Marathon festival at the end of the month,” Kate told insideMoray this week, adding: “I will be running my first ever 5km since shedding 4st recently – while Chris is taking on his first Marathon having said he was inspired by my efforts.”

It will very much be a family affair with the couple’s three-year-old daughter Edith being used as their inspiration to lose weight and improve their fitness levels.

Kate added: “The RAFBF has been chosen because of the work they do in the RAF community – but particularly for us through the provision of a soft play area at RAF Lossiemouth, where we can take our daughter to keep her active and happy particularly during times when her dad is away.”

The cake competition will be judged by local Café and baking experts at Aroma, with a prize list that includes family tickets for Landmark, Infinity Trampoline Park, Moray Leisure Centre and the Keith/Dufftown Railway – among many others.

The Cake Competition and Craft Fayre is being held on May 14 at 10am until 1pm – for information on entry to the competition contact teamsharp047@gmail.com