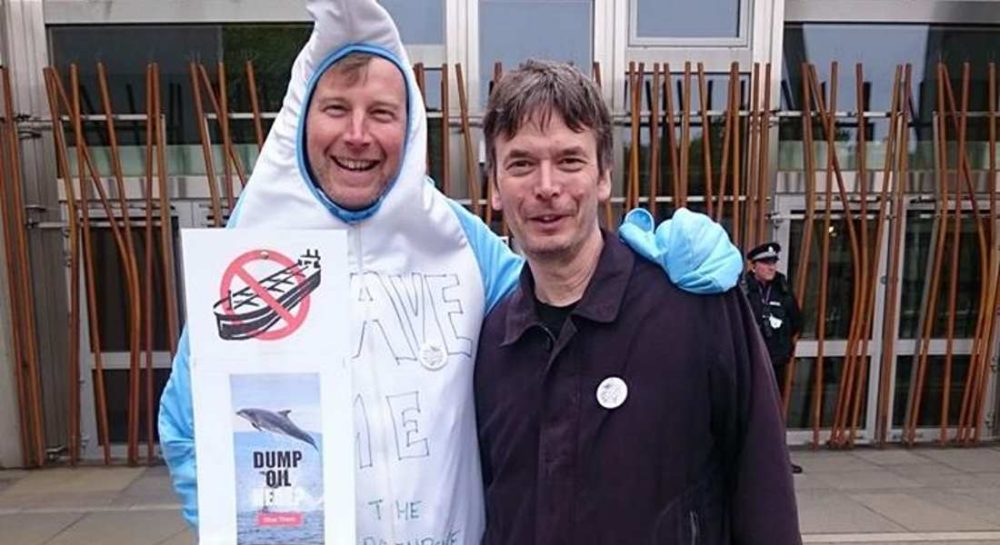 A WORLD-RENOWNED crime writer has stepped into the battle to halt controversial oil transfers from taking place in open water on the Moray Firth.

When campaigners gathered at Holyrood for a debate on the plans by the Cromarty Firth Port Authority on Tuesday, they were joined by author Ian Rankin.

Mr Rankin was one of the 100,000 people who signed a petition calling on the Scottish Government to act over the issue, with fears that should it go ahead it could spell disaster for marine life in the Moray Firth and hit tourism throughout the region.

The ‘Rebus’ author has a home in Cromarty where he often escapes to write and relax – and featured the popular dolphin-watching area at Chanonry Point in one of his novels. Joining the campaign group Cromarty Rising at Holyrood, he said: “One spill means a day’s less profit for those organisations – but it means the end of shellfish, dolphins and people’s livelihoods.

“I am against anything that will interfere with the environment – I am just completely against it, it is not needed.”

In the debate regional Tory MSP Edward Mountain said that he backed the campaign – although he did believe that the risks had been over emphasised. He said: “In the last ten years any spills from ship-to-ship transfers have been rare and this would suggest they are relatively safe.

“The CFPA must, however, listen to the communities and if they cannot address their concerns they should not resubmit their application.”

Moray residents attending the debate included Elizabeth Harley from Roseisle, who said: “This is a disaster waiting to happen – it makes no sense whatsoever. We have the largest bottlenose dolphin population anywhere in the North Sea and they are incredibly special.”

Ahead of the debate the CFPA insisted that they would be going ahead with a second application to establish the transfers, having earlier been told the moderate their plans and consult further with local environmental organisations.