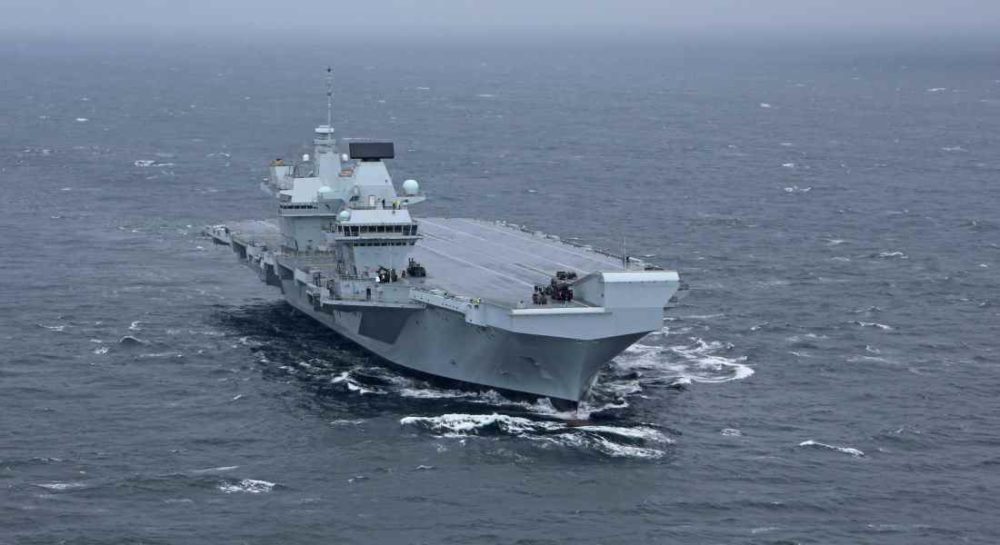 NOW OUT OF PORT for the first time and heading up the north east coast, the largest vessel ever built for the Royal Navy will, it is hoped, soon be seen from the Moray coast.

It is being eagerly anticipated that HMS Queen Elizabeth will be sailing up the Moray Firth at some point during its six-week long sea trials – with insideMoray understanding that a visit to Invergordon is planned.

Should that prove to be accurate then the new aircraft carrier will certainly be seen from Moray – and with reports of groups of Royal Navy personnel being sighted in the vicinity of RAF Lossiemouth that likelihood is growing.

After edging out of Rosyth dockyard HMS Queen Elizabeth was joined by her escorts, HMS Sutherland and HMS Iron Duke. Type 23 frigates Sutherland and Iron Duke include Merlin Mk2 helicopters of the Fleet Air Arm tasked to guard the seas as the trials get under way.

Commander Andrew Canale, the Commanding Officer of HMS Sutherland, said: “It is a huge honour for us all in HMS Sutherland to be the first ship to escort HMS Queen Elizabeth on her maiden sea voyage.

“This is a new chapter in the history of the Royal Navy in which our aircraft carriers will have the ability to project power globally for the next 50 years. “Everyone in HMS Sutherland is proud to be involved in this historic occasion. For me and all my ship’s company, seeing her on the ocean waves for the first time is a sight we will never forget.”

The sea trials are designed to test the carrier’s engines and propulsion systems, plus her ability to produce fresh water, cope with sewage, feed the crew, and supply those on board with electricity.

Lieutenant Dominic Rotherham, the flight observer of HMS Sutherland’s embarked Merlin Mk2 flight crew, said: “Today we were tasked with securing the seas around HMS Queen Elizabeth to make sure she is safe to conduct her sea trials.

“As an observer in the Fleet Air Arm, seeing her from the air for the first time brought home to me the scale of the future flagship and the power she will represent overseas. It is a privilege to fly from HMS Sutherland’s flight deck, but I’m also excited to one day operate from HMS Queen Elizabeth.”

The carrier’s departure from Rosyth on Monday is one highlight of a national effort which has involved more than 10,000 people across the land – not least six shipyards – clocking up 51,000,000 man hours.

There were just 35cm either side of the carrier’s gigantic hull as she squeezed through the lock at Rosyth, and a mere 50cm separated the keel from the lock bottom as 11 tugs assisted Queen Elizabeth into the Forth before she began her maiden voyage.