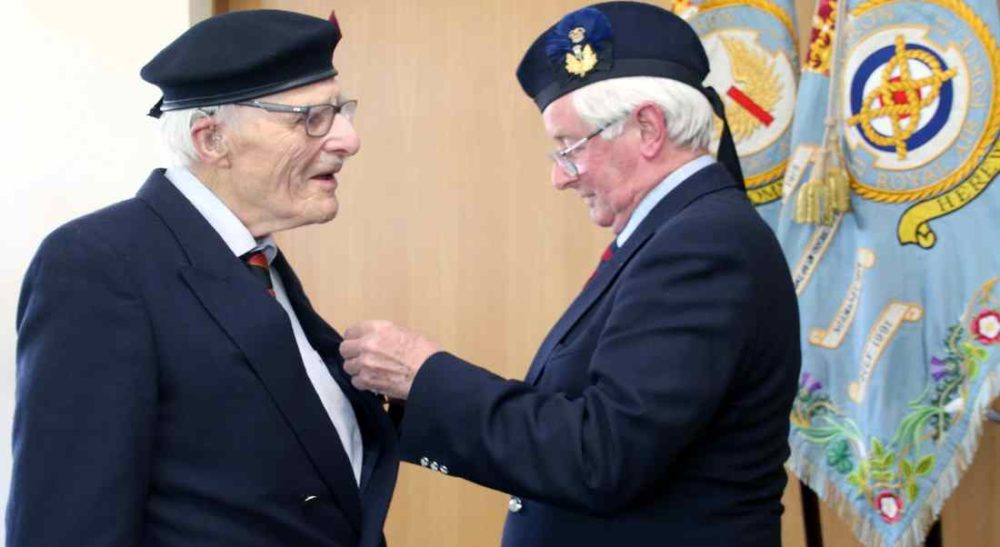 A RARE AND UNUSUAL ceremony has been held at RAF Lossiemouth with the presentation of military medals to a veteran of the D-Day landings.

The base was the venue for the presentation to Colin Clements, an Army veteran of the second world war who saw his first day of active service on June 6, 1944 – as part of the landings on Gold Beach.

It was only when attending the D-Day commemorations last year that Mr Clements’ became aware that he was entitled to a variety of medals – but had never received them. On his return to the UK, applications were completed that resulted in the presentation by the Lord Lieutenant of Moray at the base this week.

The 92-year-old splits his time between Somerset and Fochabers – so when RAF Lossiemouth’s Wing Commander Dan Lunnon-Wood, a neighbour of the veteran, learned of his story he organised the medal presentation on the base.

Mr Clements was presented with four service medals by the Lord Lieutenant of Moray, Grenville Johnstone at the event in the RAF Lossiemouth Officers’ Mess. These were: 1939-45 Star, France and Germany Star, War Medal 1939-45, General Service Medal 1918-62 with Clasp Palestine 1945-48.

Wing Commander Lunnon-Wood, a neighbour of Mr Clements, had been amazed by the stories of his military career, he said: “Colin’s life is a bit of a ‘boy’s own’ story. I’ve enjoyed many hours in his company hearing about his childhood in China and his incredible military career. “We are only up to 1942, but I hope that this will continue for many years. At the age of 92 he still rides his bike around Fochabers and creates the most amazing wooden products and pieces of art. It was a genuine honour to have his medals formally presented to him.”

The son of a missionary in China, Mr Clements was born in January 1925, he returned to the UK at the age of 13 and settled in Dover. At the age of 18 Colin volunteered for military service and on arriving at his unit, 4/7th Dragoon Guards was off to Dumfries and Galloway for ‘top secret’ training.

Colin and his colleagues were working on the development and testing of an amphibious tank, a task so dangerous that the 4/7th Dragoon Guards actually lost more men during this period than they did on D-Day.

On June 6 1944, Mr Clements’ first day of active service, the 4/7th Dragoon Guards came under heavy fire, as he made his way on to Gold Beach in an amphibious tank. Under concerted shelling by the German Forces his tank was hit twice, and in his words “it was like someone had taken a massive ice cream scoop and removed part of the tank.”

Following the Normandy Campaign, Mr Clements’ regiment were involved in the liberation of Lille and Brussels and the rescue of paratroopers from Arnham. In 1946 the 4/7th Dragoon guards travelled to Palestine as part of the British force delivering the League of Nations Mandate.

Mr Clements was demobbed in 1947 and following a period at Birmingham University had a plethora of jobs and businesses. He never applied for his service medals after his military service and it was just as a result of meeting up with his former World War Two colleagues that he realised this was necessary.

Mr Clements is also eligible for the National Order of the Legion of Honour – this has not been presented to him to date.

Eric Johnston is a friend of Mr Clements and has written a book, ‘Reflections of a Tank Trooper (Ret’d)’, about the life of a tank driver during the war.