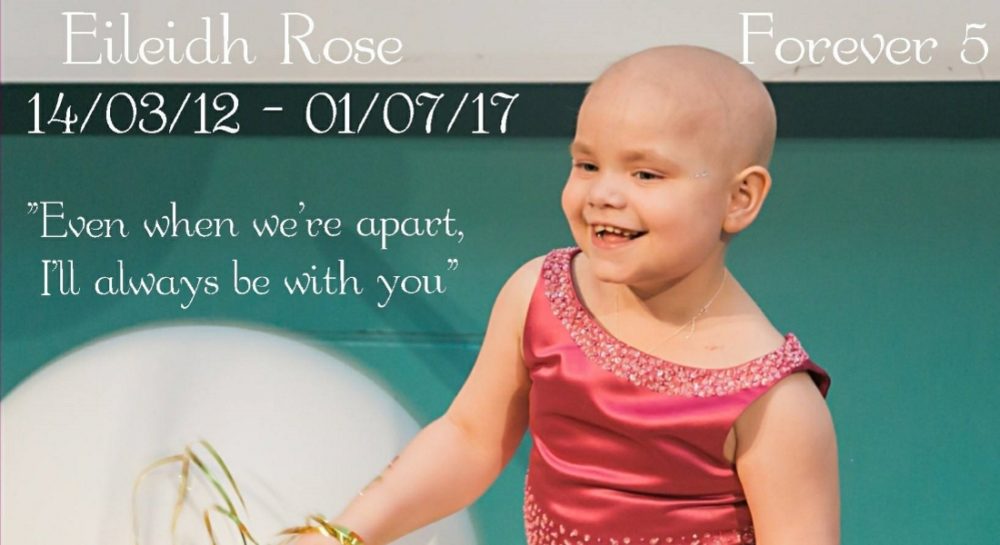 THE MORAY FIVE-YEAR-OLD who touched people in every corner of the world has lost her battle against the cancer neuroblastoma.

Eileidh Paterson’s mother Gail broke the tragic news that her brave, brave daughter had succumbed to the disease on Saturday at 11.45am.

Throughout Eileidh’s battle against neuroblastoma, Gail has shown incredible courage of her own in sharing their battle first with thousands of friends in Moray and ultimately with the millions whose hearts were captured by her amazing little girl.

Posting on ‘Eileidh’s Journey’ Facebook page late last night, Gail had to deliver the message she has been dreading but, for some time, expecting.

She said: “With a very heavy heart, I’m heartbroken to tell you all that Eileidh gained her Angel wings at 11.45am on Saturday 1st July.

“Unfortunately, it was discovered on Thursday, after an ultrasound scan, that Eileidh’s liver was enlarged and full of neuroblastoma. This was the most aggressive she has ever had as it grew extremely rapidly.

“She took her last breath surrounded by her family and cuddled up with blankie – she won the hearts of everyone who met her and will be sorely missed.”

Eileidh’s story is one that has touched people around the world – never more than in recent weeks when she ‘married’ her best friend in a lavish ceremony. When it became known that nothing more could be done in Eileidh’s battle against the cancer, her incredible family and friends determined to make her final months as happy as they possibly could be. ‘Eileidh’s Bucket List’ was created in an effort to ensure that all her wishes could come true in the final stages of her young life. Top of that list was that Eileidh wished to marry her friend Harrison Greir. With the help of what Gail described as “many amazing people”, the ‘wedding’ took place on June 18 at the Aberdeen Exhibition and Conference Centre.

Tributes to Eileidh have been arriving throughout the night from every corner of the world, all from people who have been touched by the story of a little girl from Forres and her family who simply refused to give in to despair.

We speak for all in Moray as we express our own sorrow at the passing of Eileidh Rose Paterson, who gave nothing but joy to everyone and has left the world a much better place for having been witness to her incredible courage matched only by that of her family.