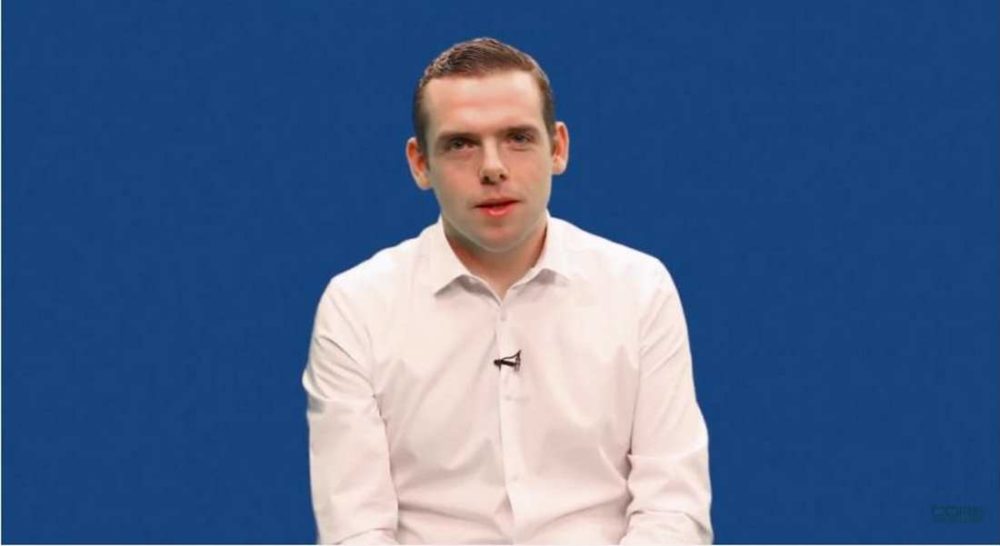 MORAY’S MP HAS APOLOGISED for sparking a furore at home and overseas for saying that his priority if prime minister for a day would be to introduce tougher enforcement on gypsies and travellers.

Douglas Ross was taking part in a quick-fire question and answer video that was intended to be a fun way of introducing new MP’s to the public.

However, the MP sparked condemnation from opposition politicians, traveller representatives and even Amnesty International over his comment – which he insists was off-the-cuff but a very serious issue in his Moray constituency.

Mr Ross appeared on the BBC’s Good Morning Scotland programme today to clarify his position – and issue an apology for the comment, saying: “I do apologise for saying that would be a number one priority as prime minister, that clearly wouldn’t be the case for any prime minister.”

However, the often straight-talking MP reminded people that he had been at the heart of a land dispute in Moray five years ago in his Fochabers/Lhanbryde ward on Moray Council. Then, an illegal traveller site was set up at Doohill, near Lhanbryde, and retrospective planning permission rejected by the local authority.

That was then backed up initially by the Scottish Government who had agreed the residents should be evicted – however, that decision was ultimately reversed with Mr Ross barred from voting because of his stated opposition to the site.

Commenting at the time Mr Ross said: “It’s been a strange decision to say I can’t vote because of my opposition to the site. I feel I am being gagged on my views. This has been a long running saga and questions remain over how the council had handled the situation.”

In the broadcast this morning the MP said that and other issues remained topical in Moray: “They are an ethnic minority, therefore when they turn up on land that is not theirs and establish illegal and unauthorised traveller encampments, they are protected, yet the settled community, if they were to do the same, are not protected.

“This is where you get divisions within communities, because they see one rule for the travelling community and one rule for the settled community. In terms of legislation to remove them from unauthorised, illegal encampments, they do receive preferential treatment.

“Because you have to go to the courts to get permission to get them to leave your own land, you have to pay for clear-up – many times when they leave the area in a significant mess.

“This all has to be paid for by the local taxpayers, who want to see something done to ensure that these individuals – who give a bad name to all travellers – are dealt with to ensure we can have a better relationship between the travelling community and the settled community.”

The issue will be discussed this evening as part of Wave Newsbeat with insideMORAY, our weekly collaboration with the community radio station.

Guests this evening are local Elgin councillors Ray and Maria McLean – the show can be heard live at 6pm via this link.