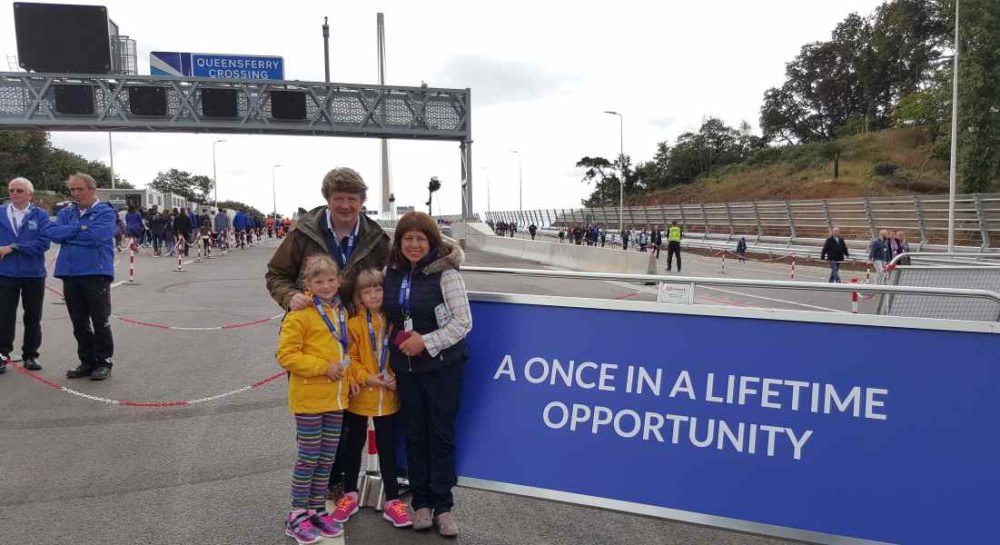 A MORAY FAMILY took part in what was described as a “once in a lifetime opportunity” on Sunday by walking over the new Queensferry Crossing.

For the Dunbar family, however, it was much more about helping a local community towards obtaining some life-saving equipment than the thrill of walking over Scotland’s latest technological masterpiece.

The local community in Garmouth are seeking to raise funding so that they can turn a local red telephone box into the home for a new defibrillator, a piece of equipment that the public is becoming increasingly aware of as the essential for those who suffer from a heart attack.

Crinan Dunbar joined his wife Alex and twins Ianthe and Flo on the walk over the bridge, telling insideMORAY: “The twins are pupils at West End School while Alex is the parent council head at the school. “It was Alex who came up with the idea of creating a video at the school to advertise for a head teacher post earlier this year. This time though it was decided that walking over the bridge might be a good way of drawing attention to the campaign in Garmouth to place a defibrillator in the recently acquired community-owned phone box.”

The local community council has set up a specific bank account that they hope will ultimately hold sufficient funds to purchase and fit the defibrillator – and to that end they have launched a new Crowdfunding bid online.

Crinan added: “The issue for Garmouth is similar to many more remote communities in Moray – the first ten minutes for those suffering a heart attack is crucial, but it can take an ambulance crew at least 20 minutes or more to get from Elgin or Keith to the village – and even then, that is provided they are not tied up at another incident.”

The estimated cost of purchasing and installing a defibrillator is between £1800 and £2000.