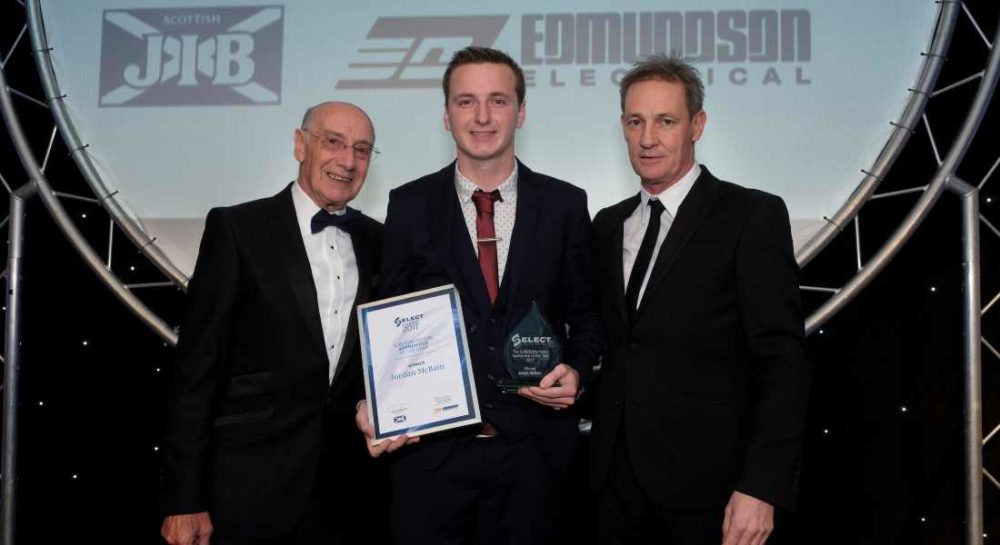 AN ELGIN MAN has scooped the prize of being named Scottish Apprentice of the Year in the electrical sector awards – but it was also a certainty that the winner would be called Jordan!

All three finalists for the prestigious honour hosted by SELECT, the campaign trade body for the industry in Scotland, had the same first name – Jordan McBain, Jordan Gilchrist and Jordan Scott.

In the event it was the 21-year-old Jordan McBain, who works for G&A Barrie Building Services, who scooped the top prize – beating off not only his namesakes but hundreds of entrants from around Scotland.

Jordan will be taken on a visit by Schneider Electric, to their plants in Grenoble, where he will be given an insight into Schneider’s Research and Development centre.

After picking up his prize Jordan said: “This has been a terrific night for Team Jordan! Seriously, I am delighted to have been chosen.

“I have always believed in working hard and giving of my best, but to have my efforts recognised at this level is just marvellous. I am very excited about going to see Schneider’s latest innovations in France.”

The Apprentice of the Year award was sponsored by the Scottish Joint Industry Board and Edmundson Electrical, the leading distributor of electrical equipment to trade and industry in the UK. It was presented at a sparkling gathering at the Radisson Blu in the centre of Glasgow – hosted by Keith Aitken, one of Scotland’s most respected and versatile journalists.

The award encourages and rewards electrical apprentices who have demonstrated that they have attained the highest standard of academic and technical competence and displayed excellent personal qualities in their education and training. It was presented by Gary Mason of Edmundson and Jock Simpson of the SJIB.

G & A Barnie was established in Wick by Alex and Gordon Barnie in 1985 and has branches in Inverness, Wick, Orkney, Stornoway, Elgin and Aberdeen.

A spokesman for the company, for whom Jordan Scott also works, said: “We are all very proud of both Jordan’s in the company and particularly pleased for Jordan McBain, who won the Apprentice of the Year title. Both young men are hard-working, dedicated to the trade and a credit to the company.”