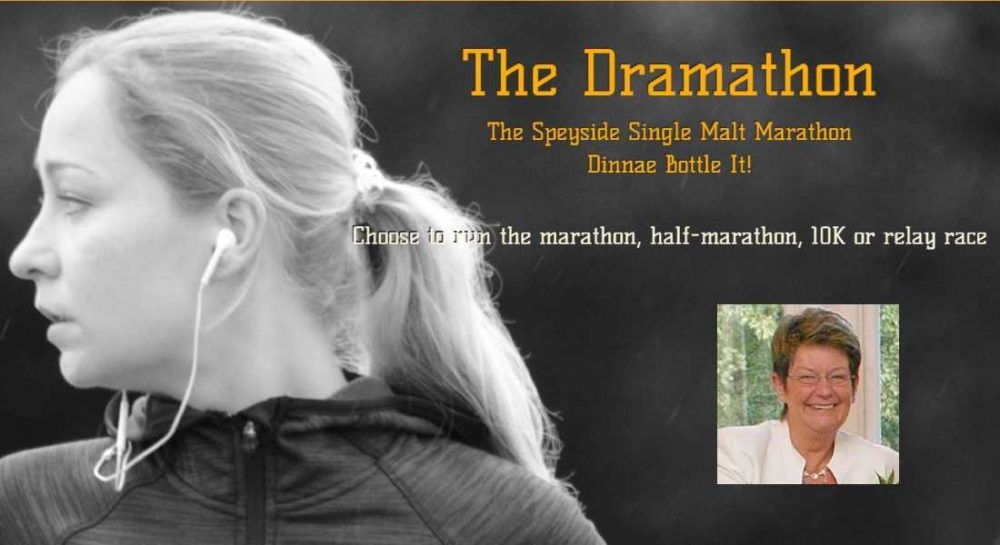 A FOCHABERS WOMAN is set to take on a “whisky-infused” marathon to help raise awareness and funding for MND Scotland.

Gillian Pirrie, 39, will take on the Dramathon event on October 21 in memory of her family friend Mary Thomson – who Gillian described as her “second mother”.

Mary sadly passed away in September 2015 after living with MND for over four years – although she had only been diagnosed with the condition six months before her death. Now Gillian will take on the Dramathon – an event through 26 miles of forest trails, minor roads and hilly terrain on a route that takes in visits to several distilleries.

The route will pass distilleries on its way from Glenfarclas to Glenfiddich, who are the main sponsors of the event, with those taking part earning a stamp at each stop – entitling them to claim a corresponding miniature at the finish line.

Gillian said: “Mary was a young 67 when she died, a much loved wife, mum, nana and friend. She started to notice very small and gradual problems with her balance but initially these were dismissed as nothing more worrying than a trapped nerve or just the usual aging process.

“They grew more persistent though and it was only six months before her death that Mary got a definitive diagnosis of MND. She accepted her diagnosis with enormous courage and determination. She never showed any self-pity and tried to stay as upbeat as possible.

“The MND progressed quickly though and Mary’s mobility started to suffer. Plans were in hand for Mary and her husband Brian to move to a house with special adaptations so that Mary could be more mobile and more comfortable but sadly those plans never came to fruition.”

Gillian said that after several weeks confined to her bed, Mary was admitted to hospital with what many believed to be a minor complaint – but her condition deteriorated quickly and she was moved to the High Dependency Unit.

Gillian added: “The biggest challenges for Mary were losing her independence, mobility and having to rely on others more and more – she has left such a void in the lives of her remaining family and friends.”

Her family were thankful for the support she received from carers with Gillian saying: “She received so much support from her MND nurse and her consultant. Her family found MND Scotland to be an insightful resource when coming to terms with Mary’s diagnosis and in the months after she had passed. The collection from Mary’s funeral service was donated to MND Scotland.”

Now Gillian aims to repay MND Scotland by raising funding through taking part in the Dramathon – although when she first signed up it was not with the intention of fundraising: “When I signed up for the Dramathon I had no plan to fundraise, just a challenge to push myself after the birth of my son Finlay.

“But using my old training routes along the Speyside Way had me reminiscing about our times in “The Mean Green Machine” – which was Mary and Brian’s campervan that would provide cups of soup and water along my three day challenge.

“That was when it hit me; I should do this for Mary, for MND Scotland. It made perfect sense that she would be with me for this and support me one last time.

“I can still hear her voice, and I still regularly ask myself – “What would Mary do?” She influenced so much in my life and still continues to do so. So, what would Mary say? What she always would; “We will support you every step of the way””

Iain McWhirter, MND Scotland’s Head of Fundraising and Volunteering, said: “I want to thank Gillian for taking on this incredible challenge to help support people affected by Motor Neurone Disease in Scotland.

“The story of Mary and her family is heart-breaking and I want to thank Gillian for speaking out and raising awareness of MND and its impact on families like Mary’s.

“Gillian’s challenge hasn’t even started yet and she’s already raised over £500 for MND Scotland. That’s enough to fund one of our Time Out Grants, which give families one final chance to enjoy a holiday together. It is also enough to provide a month of counselling for someone struggling to come to terms with their diagnosis, as well as covering the costs of running one of MND Scotland’s support group meetings.

“I want to encourage people to support Gillian wherever possible and team MND will be cheering her on.”

Anyone who would like to support Gillian’s efforts, please visit her JustGiving page, where you can sponsor her and donate directly to MND Scotland.