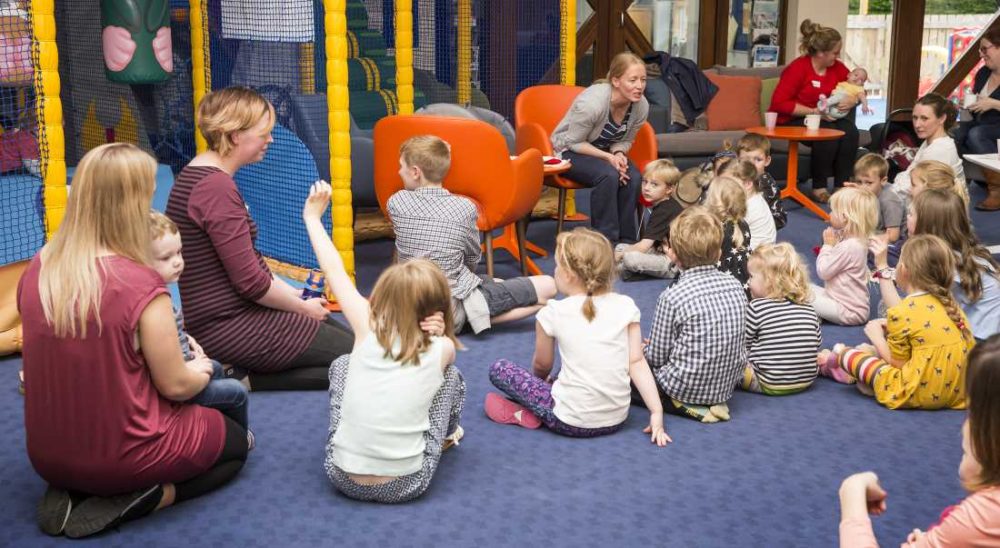 ‘MESSY CHURCH SESSIONS’ held at RAF Lossiemouth are believed to be the first on a military establishment to adopt the method of engaging with the entire family.

Forces families have been attending the sessions at St Aidan’s Church on the base, where they are provided with a warm welcome – alongside meaningful and enjoyable craft activities.

Messy Church is a way of church that is especially suited to families – but also welcoming to everybody, particularly those who have never belonged to a church before. Creativity and hospitality are at its core, with Bible based craft activities, celebration and a meal together central to each session.

At RAF Lossiemouth serving personnel are encouraged to come along after work to join their families in time for supper together. The sessions first started at RAF Lossiemouth three years ago, when the Station Chaplaincy Team were looking for new ways to engage with families.

Now it remains as popular as ever, so much so that some of the padres in post when Messy Church started have begun new Messy Churches on subsequent tours, the RAF Cranwell Messy Church one such example.

Messy Church is particularly suited to the forces way of life where personnel can be absent for long periods of time and those at home may be far from friends and extended family. It provides a drop-in session about once a month for families to connect with one another. One of the parents at St Aidan’s said: “We love Messy Church – it’s an incentive to get out even on rainy days, full of different child friendly activities. Messy Church introduces Jesus and the Bible in a non-intrusive way, and there’s always someone there with a friendly ear. It’s like a wee parent support group for adults too!”

Messy Church has proved such a success at RAF Lossiemouth that one of their initial volunteers, Nicky Slater, has now joined the central Messy Church team as their Forces Coordinator. Her voluntary role is to advise and support other RAF, Navy and Army bases thinking about starting up themselves.

Messy Church founder Lucy Moore said: “The BRF Messy Church team were really encouraged to learn that RAF Lossiemouth was running a thriving Messy Church, and it wasn’t long before we realised that Messy Church could be a really useful ministry model that more forces bases might like to adopt. To that end we were delighted when Nicky agreed to come on board as our Forces Coordinator.” He said: “It was good to hear for myself just how well Messy Church is working at St Aidan’s. The Station Chaplains there recognise its benefits, and I’m more than happy to endorse it and lend it my full support. It’s certainly something other bases might like to try, and to that end I wouldn’t hesitate to recommend it.”

Senior Chaplain at RAF Lossiemouth, the Reverend (Wing Commander) Colin Weir concluded: “Messy Church has been a wonderful addition to what we offer at St Aidan’s and is a very real support to our military families.

“Our Messy Church team of volunteers, especially with Nicky’s enthusiasm and leadership, are central to its success and the chaplaincy team here at St Aidan’s are thrilled that it’s continuing to thrive. We’re hopeful the next few years will be just as fruitful.”