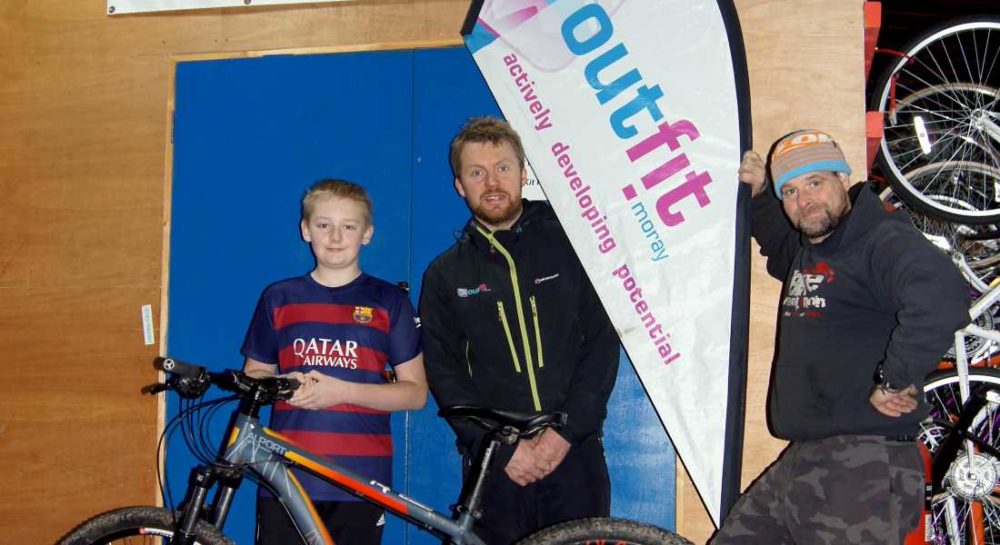 A MORAY TEENAGER is set to embark on a challenge in support of his favourite local charity – because they have always provided him with great fun!

At just 13, Rhys Griffiths already knows what he likes doing best – and that came from a week-long ‘Enhanced Transition’ programme with Lossiemouth-based Outfit Moray two years ago.

That came at a time when he was in the process of moving up from Mosstodloch Primary School to Milnes High School – and he appreciated the aim of the course, increasing self-confidence, self-esteem and improving social reaction.

A group of pupils from Milne High School attended as it was identified that this kind of course would be of benefit to them. During the course Rhys tried a variety of new activities including mountain biking, Coasteering, survival bush craft skills.

Rhys said that the course was great fun, helping him learn how to work with others – and has given him more confidence to try new things. Mum Lauren says that she saw a transformation from a shy, underconfident lad to a happier more outgoing young person willing to try new things.

Rhys is also now more active as he has taken up a new hobby of mountain biking.

Looking back Rhys said: “I really enjoyed it – I really didn’t think I would be able to do the Coasteering but with the Outfit Instructors help, I did do it.

“There was a big jump into the sea and I didn’t think that I could do it, but the instructors coached me and encouraged me and in the end, I jumped!

“I was very proud that I managed the jump as only a small number of the group were brave enough to do it. It taught me how to work with others and gave me confidence to try new things in the future.”

His mother was quick to praise both Outfit Moray and her son: “Before Rhys went to Outfit Moray he was shy and withdrawn. He wasn’t confident around new people and didn’t like to attempt new things as he didn’t believe that he could do them.

“After the time spent with Outfit, I could see a massive increase in his confidence, he was happier at school and much more willing to try new things. Rhys is now more physically active and fitter, as he now has a new hobby of Mountain Biking.”

When he learned about a sponsored challenge to raise funds for the charity, Rhys decided to put something back into the group that helped him – and offered to take part in the challenge himself.

Supporters of Outfit (including two of the voluntary directors Claire and David Alldritt) are running a 10km route on Saturday, November 25 and Rhys is joining them on a mountain bike borrowed from the charity.