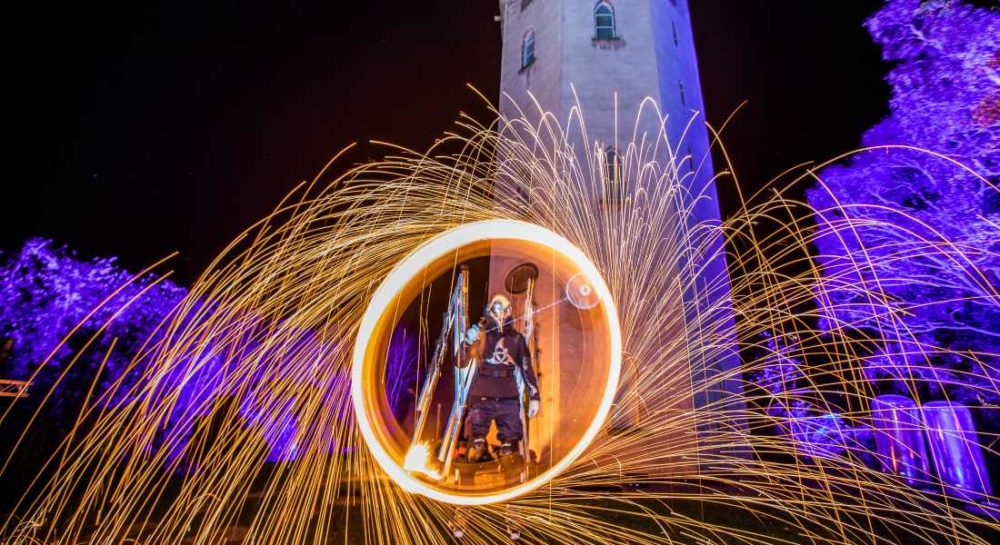 THOUSANDS OF VISITORS have so far enjoyed the family-friendly spectacular Colours of Cluny inspired by the natural setting of Cluny Hill in Forres.

Sunday is the final day of the spectacular event organised by the Forres Features Community Interest Company, a not-for-profit organisation where any surpluses are invested locally or in the following year’s event.

For the second year running, creative director Kate Bonney and her talented team have produced an dazzling show which features a multitude of special effects and state-of-the-art lighting technologies.

Kate, who is originally from Forres, became involved in the show after local butcher (and Chairman of Forres Features) Graham Murdoch spotted a story in the Forres Gazette about her involvement in the multi-award winning Enchanted Forest sound and light show in Pitlochry.

Graham takes up the story: “When I saw the article in the local paper I thought to myself, why can’t we do something similar in Forres to drive footfall to the town’s businesses during a traditionally quiet time of the year?”

Kate continues: “I was back in Forres visiting my mum and dad when I got the call … quite literally! I was actually in the shower at the time when my dad chapped on the door to say that the Graham the butcher was on the phone looking for me.

“I thought it was a bit odd, since I had been a vegetarian for 25 years!” laughed the former Forres Academy pupil – but once Graham explained his plan I was delighted to be invited aboard and the rest is history.”

Over 12,000 people saw the inaugural Colours of Cluny in 2016 and this year’s interactive show is even bigger and better. Costing £200,000 to stage, it features flame shooters, a fire pit for toasting marshmallows, and live performances from the incredible stilt-walking, rope-swinging, fire juggling performers.

A musical score composed by Kevin Murray completes the magical experience. Demand for tickets has been extremely high this year and Forres Features is urging people to book online to avoid disappointment.

Graham Murdoch added: “A limited number of tickets may be available each night, subject to availability. But these will be offered on a first-come first-served basis depending on how many slots are available after advance ticket-holders are admitted. The only way to ensure you get your preferred time and date is to book online to avoid disappointment.”

The final displays will be held on November 19, 2017 at Cluny Hill – tickets and more information is available at www.coloursofcluny.com or by calling 0844 888 9991.