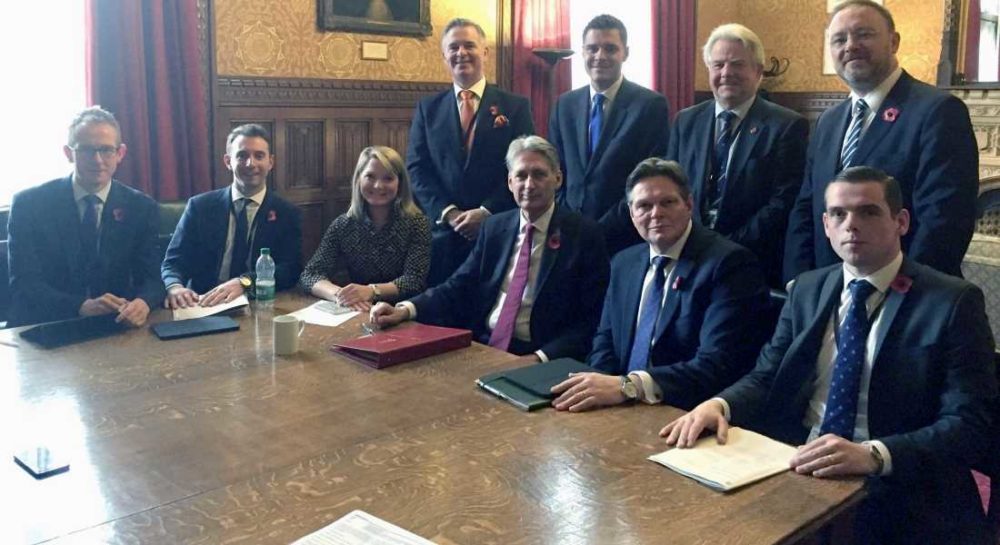 MORAY MP DOUGLAS ROSS has hailed announcements made by Chancellor Phillip Hammond in Tuesday’s budget that he believes will directly benefit the economy of Moray.

As well as a freeze on Whisky duty, Mr Hammond announced the scrapping of VAT on Scotland’s emergency services and a huge investment in the oil and gas sector.

He also announced a £2billion rise in the Barnett Funding to Scotland, which Mr Ross insists should be used to help Moray at a time when local services and health funding are stretched.

The Moray MP said: “The Conservative Government has delivered on its promises to Moray. Not only have we delivered for the Whisky industry and the Oil and Gas sector, but we have cleaned-up the mess left by the SNP in Scotland – whose decision to centralise services with the creation of single Police and Fire forces resulted in them having to pay VAT.

“This was known to the Nationalists when they pressed ahead with their centralisation and included this in their Financial Memorandum, but they chose to do nothing about. Today, because of influence from the Scottish Conservatives, the UK government have righted that wrong.” The MP said that the freeze on whisky duty was “great news for Moray” with almost 40% of all distilleries in Scotland located in the region.

Mr Ross added: “I opposed last year’s rise and I am delighted that the influence of the 12 new Scottish Conservative MPs has had such a dramatic impact on the Government’s policy.”

Karen Betts, Scotch Whisky Association chief executive, said: “The freeze in duty is a welcome first step in securing a more competitive tax for Scotch Whisky in our home market.

“The industry would like to thank Douglas Ross and other Scottish Conservative MPs who have worked hard to help to secure this freeze. A second duty rise in 2017 would have been unpalatable for Moray where the jobs, investment and tourism the industry helps to support are vital.”

Mr Ross also challenged the SNP Government to ensure that the increase of £2billion in the money given via the Barnett Formula supports local services in Moray.

He said, “Moray Council faces making cuts due to repeated poor settlements from Holyrood. With this extra £2billion from Westminster, Nicola Sturgeon can direct funds straight to Moray so that our services can be saved.

“There is no excuse for the SNP now – the money is there. They just need to listen to the people of Moray.

“We also urgently need investment in our local health services. Again, the UK government has given the Scottish Government this additional funding, we now need the SNP to invest in this part of Scotland.

“When elected earlier this year I said I would stand up for Moray at the heart of government. These announcements show the positive impact Scottish Conservative MPs in government can deliver for Moray.

“The Chancellor admitted we had bent his ear on a number of issues in the budget and I’m glad this has allowed us to deliver for Moray.”

Last night the Conservative group leader on Moray Council was also calling for a “fair deal for Moray”.

Councillor Tim Eagle said: “Just last week we urged all our elected representatives regardless of political affiliation to join us in requesting the Scottish Government to provide more financial support for Moray Council as we were concerned about the future.

“The announcement that Holyrood will now have an extra £2billion to spend is great news and it will increase our efforts to secure a fair share for Moray. If we go on the basis of Moray’s population our share would be £35million.

“If that were to happen it would transform the Council’s finances for the better and secure the lifeline service our people rely on, it would simply be transformational to us here in Moray, which is so much needed.

“As has come out recently, at the moment, our local services are in real trouble because of the financial crisis that the Council faces after years of poor financial settlements from the Scottish Government.”

He added: “We know there had to be some tightening of the belt and all Councils have felt the pain of that but Moray has been particularly hard hit because its size and location. This is made worse because Moray also gets very poor support for the NHS.

“In all seriousness we need more than ever to come together now for the future of Moray.”