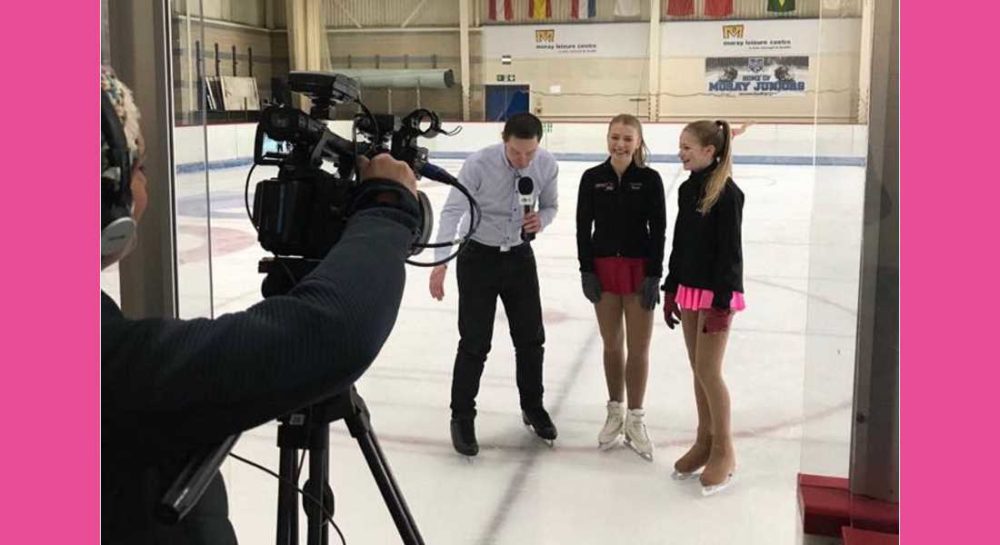 FIVE MORAY ICE SKATERS who qualified for the British Figure Skating Championships had a taste of what that success means when they were visited by a television crew this week.

The Scottish Television team turned up to speak with the skaters and coaches from the Moray Figure Skating Club (MFSC) who will be involved in the championships in Sheffield this week.

The skaters have worked tirelessly throughout the year to qualify for the Championship, where only the very best in the UK attain the qualifying criteria.

Now Shelby Summers (17) from Keith, Vivienne Boyd (15) and Ruby Boyd (13) from Elgin, Caley Stobo (15) from Lossiemouth and Emma Jane Marandola (12) from Buckie will be seen on STV2’s ‘Live at Five’ show on Monday.

The five are all trained by MFSC brother and sister coaching team Graeme Summers and Sue Summers-Farrell. This year MFSC have the most attendees at the Championship in their history – a sign of how well the club is doing both nationally and internationally.

Club coach Graeme Summers said: “We are extremely proud of what the skaters have achieved.  To reach the Championship does not happen by chance, but takes hours, days, weeks, months and years of practice, dedication and discipline. They not only represent MFSC at the championship, but also the whole of Moray”.

In addition to those who have qualified for the British Championships, MFSC have three skaters who have been selected onto the National Ice Skating Association Great Britain Development Squad, their most successful to date. To reach the qualifying criteria for the GBR Development Squad is exceptionally difficult and a very small percentage of skaters who possess those attributes are permitted entry into this exclusive club.

The skaters – Ruby Boyd, Vivienne Boyd and Emily Dale – can look forward to a bright future in the sport.   Earlier this month Ruby represented Great Britain at the 2017 Volvo Open Cup in Riga, Latvia where she finished a very credible fifth against skaters from all over Europe.

All of these skaters and many more will be participating in the forthcoming MFSC Christmas Gala at the Moray Leisure Centre rink on Friday, December 15 and Saturday, December 16. Ticket details are available from Sound and Vision in Elgin or by contacting Emma on 07764 818615 or Elaine on 07792 222121.