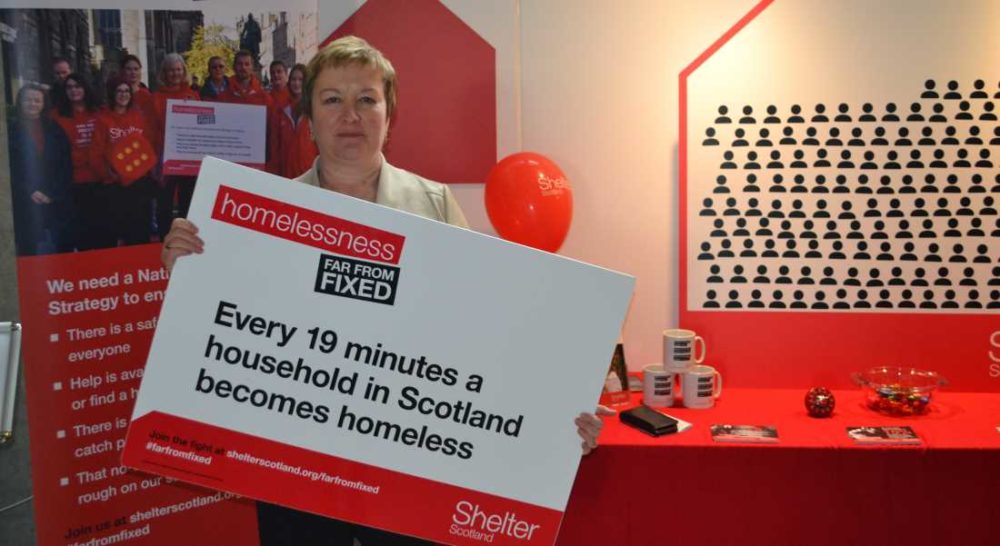 CAMPAIGNERS FOR THE Charity Shelter Scotland were welcomed to the Scottish Parliament recently by regional MSP Rhoda Grant.

Currently in the midst of their Homelessness Campaign ‘Far From Fixed’, the charity recruited the MSP to help fight for urgent action to tackle the causes and consequences of homelessness.

Shelter Scotland campaigners highlighted how a household becomes homeless every 19 minutes and gave each MSP local figures for their area showing how the shortage of housing and support is affecting every part of the country.

Scottish Government figures show the number of children in temporary accommodation is at a six-year high and in the last full year for which figures are available there was an increase in people sleeping rough before applying for help from their local councils.

Rhoda Grant said: “I was interested to note that over half of all homeless applications in 2016-17 were due to relationship breakdown.

“Other reasons were loss of accommodation tied to employment, an emergency such as a fire or flood, and overcrowding along with other life situations. Shelter Scotland works towards making sure there is a home for everyone, and that this home is safe, secure and affordable.

“In the 21st century we should not have anyone sleeping rough on our streets and I am committed to working along with other politicians to play our part in support of Shelter and the Action Group on homelessness and rough sleeping.

“When the campaign launched 12 months ago it sounded an alarm, warning that if action wasn’t taken the progress on tackling homelessness during the last ten years was at risk of being undone.”

Graeme Brown, Director of Shelter Scotland, said: “I am heartened to see MSPs, including Rhoda Grant show support for our campaign by taking the time to talk to us in parliament and find out more about how the issue is affecting constituents.

“We are seeing new steps being taken, including the Scottish Government’s creation of a £50 million ‘Ending Homelessness Together’ fund and the launch of an action group on homelessness but we really need MSPs from across the political spectrum to work together with us to make an even bigger difference.”

Shelter Scotland has submitted its recommendations for action to the Scottish Government Action group on homelessness and rough sleeping.