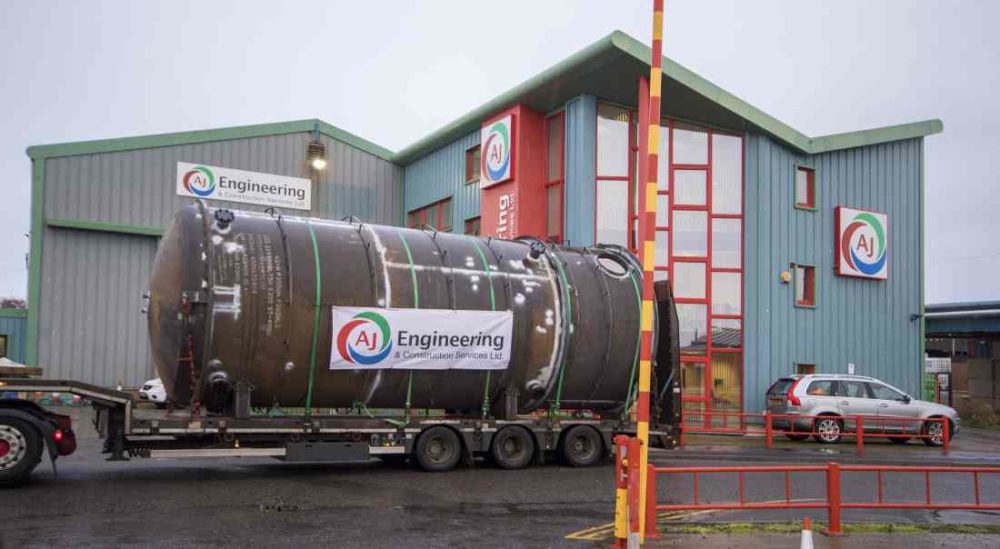 A MORAY ENGINEERING FIRM is continuing to break through barriers with their latest item out of their yard a 50,000-litre hot water tank – the largest ever to be produced by a Scottish engineering company.

Forres firm AJ Engineering & Construction were tasked with carrying out the design, fabrication drawings, manufacture, testing and coating of the storage unit.

The monster-sized piece will be used in a commercial heating system – but while the fabrication of the item was straightforward, Gary Moyes, project manager of the vessel, said due to its size there were certain logistical challenges which had to be overcome.

He explained: “As with all of the projects that we handle at AJ Engineering, we worked closely with the client to guarantee all aspects of design were fully compliant. It was an interesting project to work on as from design through to completion there was very little time.

“The whole job took just seven weeks and was actually completed ahead of schedule. It had to be delivered quickly, and along the way various checks had to be carried out, which involved narrow windows in which to complete testing so as not to impede overall progress.

“However, at the same time we had to ensure the vessel was fully tested in accordance with the design stipulations.” Gary, who has worked with the Forres firm since April last year, continued: “This is one of the biggest items to go out of the workshop in one piece. It’s certainly the biggest water storage vessel that AJ Engineering has fabricated.

“Also because of its size, we had to ensure that we complied with transport regulations which had to be planned and documented in advance.”

The firm have been responsible for an ever-increasing number of major productions – including a recent consignment of 600 individual pieces that created a platform to Bird Island in Antarctica. They also signed a contract in may for a multi-million pound windfarm deal.

They have also carried out works on the Kessock Bridge, Forth Road Bridge and the newly opened Queensferry Crossing.

Gary said: “Now that this vessel has been completed, we hope to build on this contract and complete more vessel fabrication scopes for a range of clients in the future.

“This vessel is an example of the professional and versatile skills set we have at AJE and highlights how our facility at Forres can be utilised for a variety of high quality fabrications to a wide client base.”