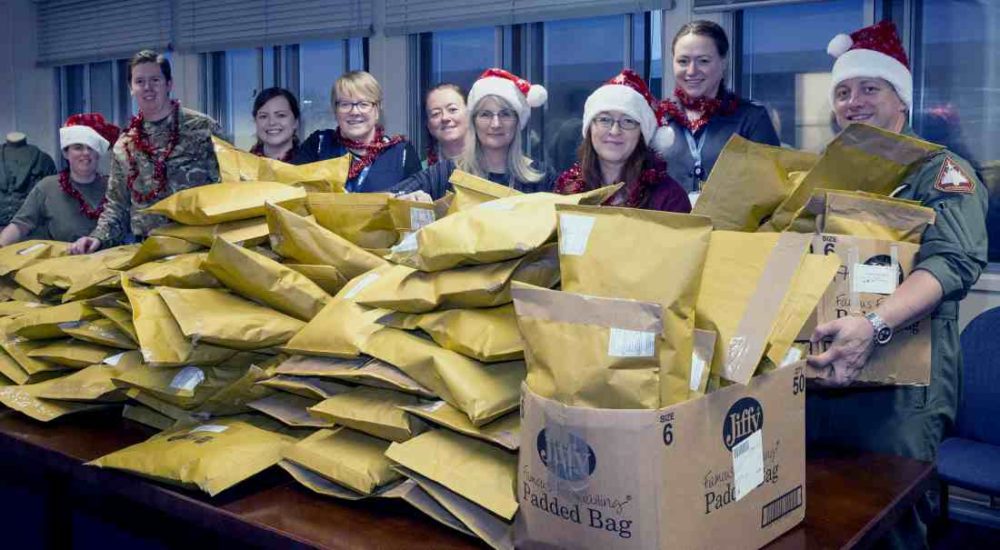 SERVICEMEN AND WOMEN from RAF Lossiemouth who are currently deployed away from Moray will receive one of 192 Christmas parcels from the base.

Parcels this year have been despatched to the Falkland Islands, Ascension Islands, Nigeria and the Middle East – with half of those involved deployed as ‘individual augmentees’.

That means they are deployed to supplement operational activities being led by units that are not based at Lossiemouth. The majority of the parcels will find their way to the Middle East.

Group Captain Jim Walls, Station Commander at RAF Lossiemouth, included his own personal message to each of the service personnel in a personal Christmas card.

All of the parcels contained the traditional shortbread, tinsel, toiletries and a pair of Christmas themed socks, two parcels contained treats for Military Working Dogs under the care of handlers from RAF Lossiemouth currently deployed in the Falkland Islands.

Local retailers provided money off or items for the parcels, including a discount provided by Tesco, shortbread provided by Walkers, and support from staff at Superdrug. Squadron Leader Arlene Walker is Officer Commanding Personnel Management Squadron and leads the Community Support Team, she said: “The RAF Lossiemouth Community Support team work hard throughout the year to ensure we provide the best possible support to our personnel and their families.

“The frantic exercise schedule and regular deployment of our personnel in support of worldwide operations necessitate long periods of separation from families and friends.

“As we approach the festive period and the majority look forward to spending quality time with their loved ones, it is important to remember those personnel who are unable to do so due to Service commitments.

“I hope the festive welfare parcels offer some element of morale to our deployed personnel, as a small gift of thanks for their service.”