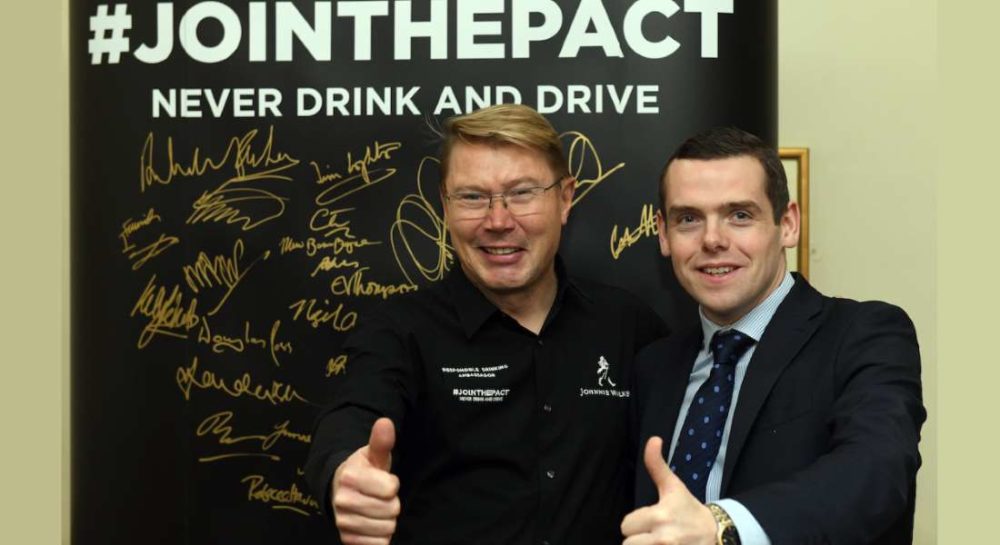 AHEAD OF FESTIVITIES to see in 2018 the efforts of former McLaren F1 driver Mika Hakkinen to promote an anti-drink driving message is being highlighted by Moray’s MP.

Join the Pact is a global responsible drinking programme run by Johnnie Walker owner Diageo since 2008 that encourages people to make a commitment to never drink and drive.

Johnnie Walker are asking people to make their commitment through using the hashtag #JOINTHEPACT on social media.

Diageo has secured over five million pledges never to drink and drive through its global programme Johnnie Walker #JoinThePact, beating its target a year ahead of its goal. Diageo have also announced a tenfold increase in its next target, aiming to secure 50 million pledges by 2025 – with 2 million pledges already secured towards this goal thanks to recent activity in India.

Moray MP Douglas Ross said: “As a huge Formula 1 fan when I was younger it was great to meet Mika Häkkinen but clearly there is also a very important message we are trying to get across. This message is relevant through-out the year but particularly over the festive period.

“If you drink and drive it puts the lives of others at risk, whether they are drivers, pedestrians or passengers in their own car. The message is clear; never drink and drive and keep yourself, your communities and your loved ones’ safe this festive season.”

In the last 50 years, road casualties caused by drink driving have fallen dramatically, but in 2014, there were still 240 deaths due to drink driving – accounting for 14% of all road fatalities. By drinking and driving, you risk your life, those of your passengers and others on the road.

Johnnie Walker is committed to responsible drinking, which is why they created JOIN THE PACT and placed it at the heart of their Formula 1 sponsorship for over 10 years.