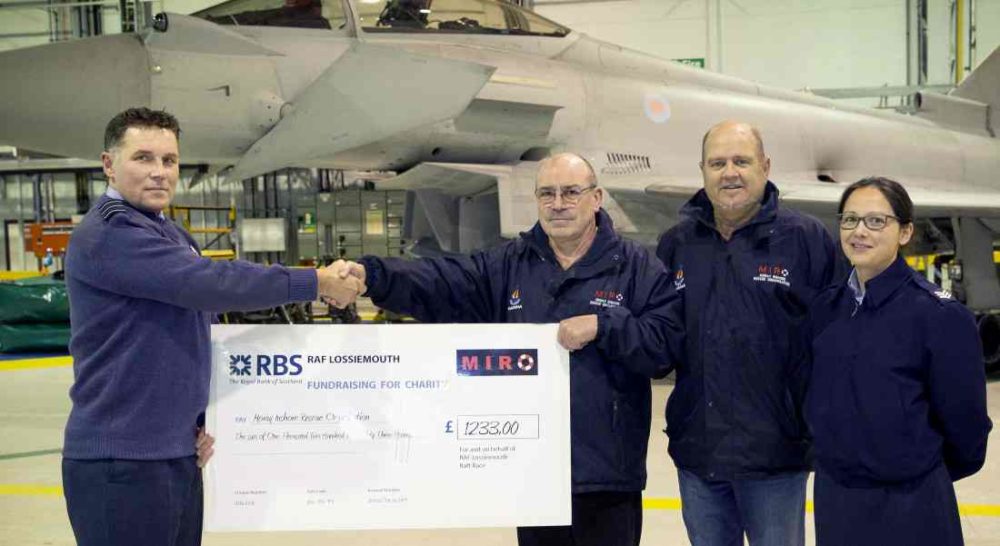 THREE MORAY CHARITIES will receive £1233 each – the result of funds raised in the RAF Lossiemouth organised Raft Race earlier this year.

Sponsorship and donations allowed cheques to be presented to MFR Cash for Kids, the Moray Inshore Rescue Organisation and Outfit Moray.

The Station Commander said: “I think this year has been a really successful Lossiemouth Raft Race. The weather held out for us, we had plenty of enthusiastic race entrants, and most importantly a lot of people came along to enjoy a good family day out and raise money for local charities. “This year we had a range of stalls including local craft and food producers, a bouncy castle and fun fair, and some great raffle prizes from Benromach, Harbour Lights, Tesco and Walkers Shortbread. Our special guests Lego Batman, Carl the Minion and Doc McStuffins were popular with our younger visitors.

“It’s great that we all, the community, the council, businesses, and the RAF, can work together to organise this popular event. Hopefully everyone will support the Raft Race again next year.”

John McEwan of MIRO said of the donation: “This generous funding will be going towards improving and upgrading our communications system, enabling the crew to operate more effectively. It is very much appreciated by all in the Organisation and we would like to thank all who made it possible.”

Speaking for MFR Cash for Kids was Lyndsay Rose, while Royce Clark accepted the cheque she said: “We are delighted to be the nominated charity for this fantastic annual event. The money raised is a great boost to our funds and will be gratefully received by our beneficiaries.

“All the money raised will stay in Moray to give our children the childhood they deserve. I’d like to thank everyone in the community for their continued support.” Representing Outfit Moray, chief executive officer Tony Brown said: “The funds raised from the Lossiemouth Raft Race will be used to subsidise outdoor learning and adventure for vulnerable and disadvantaged young people, through our EnerG strand.

“As a charity, Outfit Moray relies on fundraising to enable our delivery of outdoor activities and we are very grateful to the Lossiemouth Raft Race Committee for their support, it really does make a difference to the lives of young people in Moray.”

Organised by RAF Lossiemouth with support from Moray Council, the Lossiemouth Raft Race, sponsored by Tulloch of Cummingston, was held on Sunday, August 13. The winner of the toilet seat trophy was the team from The Steamboat Inn, Lossiemouth; second was Crown Crew, a team from Inverness; and third was the team from Miller & Swann Veterinary Surgery, Elgin.