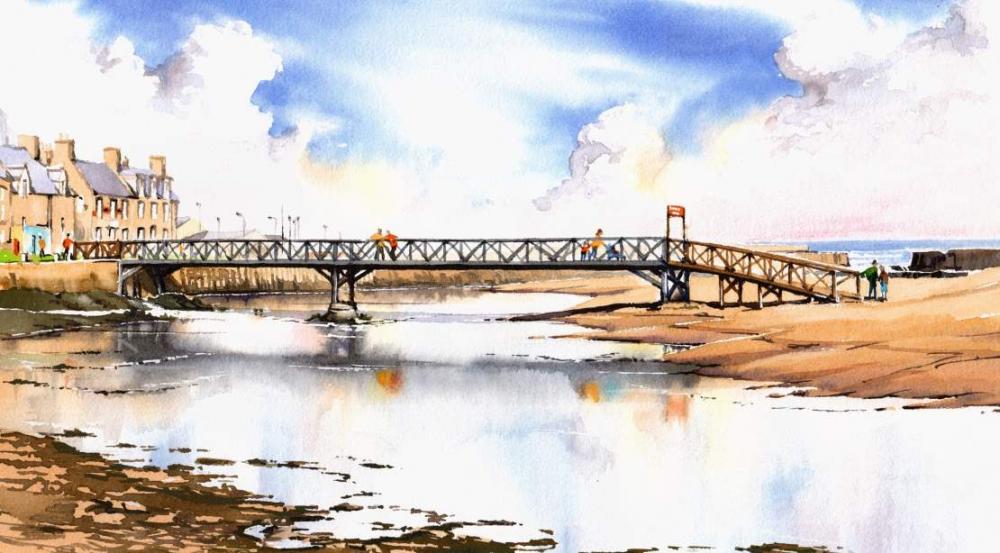 A MORAY COMMUNITY believes they have made real progress on an issue that has confounded local community leaders and Moray Council for over a decade.

Efforts to bring some order to the management of the Seatown Bridge in Lossiemouth has taxed the minds of hundreds of community leaders, with much talk but very little progress made because the ownership of the structure could not be legally ascertained.

The crucial question had to be answered before any real progress on repairs and improvements to the iconic structure – and only access to the East Beach – could be achieved. Now the Lossiemouth Community Development Trust (LCDT) believe they have a solid legal basis for progress on access to the popular beach.

They hope to progress that into a plan that would allow unbroken access to the popular beach for future generations – and warn that without that the most likely scenario is that the existing bridge would be closed, forcing a four-mile detour to access the beach.

The Trust held a briefing meeting with members of the Lossiemouth Community Council and three of the four Councillors representing the Heldon & Laich ward on Monday. At that they presented the results of their progress on ownership of the bridge. They also presented details of two reports on the current condition and recommendations for the future.

Survey’s of the existing structure in 2016 revealed it to be in need of attention, while a more detailed follow-up last year suggested that although the structure was sound, extensive work was required on safety issues on the metal and wood. Neither survey, however, took account of the bridge support below the waterline.

A feasibility report carried out for the LCDT offered three main suggestions for the future, particularly in light of the legal ownership position being clarified to the point where it has been established the Crown were owners by default – and they have now issued a ‘notice of disclaimer’ that allows any organisation with an interest to assume ownership.

The feasibility report provides three main options, to undertake work that returns the bridge to original condition, carry out basic maintenance only, or build a new bridge.

On learning that the first option was costly and would guarantee the bridge for only 15 to 20 years, the second was again costly, had greater risk and would need to be conducted every two years, both Community Council and the LCDT Board considered a new bridge to be the better option.

A spokeswoman for the LCDT said: “The new bridge option would allow the Trust to apply for grant funding that would not be available in the first two options. It would also ensure that the structure would last in excess of 100 years, well beyond the ‘care and maintenance’ options.

“The proposal is that the new bridge be built in the same position as the 1915 original, it could allow for disabled access to the beach and, importantly, access would be uninterrupted as the old structure would still be used while the new one is planned and built.

“We would hope and expect to have some level of support from Moray Council – if not financial at least technical support and advice in the process as well as the raising of funding.

“It has taken our community around ten years to get to this point – but we certainly do not have much time to bring this to a conclusion. We will certainly at this stage welcome the views of the public in Lossiemouth for these plans and will be announcing public meetings as soon as possible.”