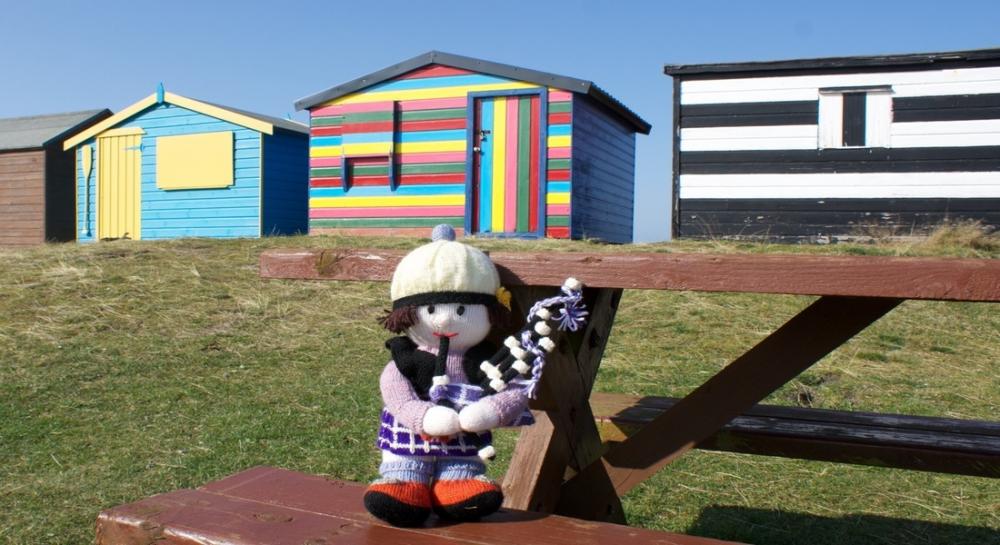 Knitted piper Morag has been travelling across Moray and Speyside to celebrate some of the attractions our beautiful region has to offer.

Piping At Forres organisers have put out an open invitation to join Morag “on a virtual journey of discovery across Moray Speyside” for a chance to win free family tickets for Piping At Forres and for The Keith & Dufftown Railway.

The competition has been a launched by the team behind Piping At Forres which will take place in Grant Park for the final time on 30 June following a six year run.

The knitted pipers were created by local craftswoman Sharon Robertson from Varis Crafts who has sold the loveable woolly musicians to visitors to the Piping At Forres in previous years.

Now Morag has branched out and been on her travels across Moray Speyside in recognition of the fact that Piping At Forres is just one of many tourist attractions throughout the region.

Joanna Taylor, a director of Forres Events Limited which organises the one-day piping and drumming extravaganza explained: “We just wanted to have a bit fun, particularly as we are in the last year and in the time we have been operating, we have seen how Moray has really found its place on the map and has become recognised for being a superb  tourist destination. Piping At Forres has played its own small part in that, but what has come to the fore is that there is such a rich and diverse offering here. We wanted to showcase this by sending Morag out and about.”

The competition will be promoted through the Piping At Forres Facebook page and people can enter by visiting www.pipingatforres.com. “Morag has visited numerous destinations around Moray,” explained Joanna, “all people have to do is go to the website, click the correct answer for each picture and all correct entries will be put into a prize draw. It’s really very simple and the winner will take home a family ticket to Piping at Forres and a family ticket for The Keith & Dufftown Railway.”

The search has been backed by Laurie Piper, Operations Manager at the region’s tourism development organisation who added: “Morag’s travels around Moray Speyside in the run up to Piping At Forres will offer her the chance to experience some of the region’s finest views, most popular attractions and best kept secrets. No matter where Morag is to be found across Moray Speyside, I’m sure she’ll be having a great time, and very much looking forward to attending the sixth and final Piping At Forres.”

The competition closes at noon on Friday 1st of June, and competitors must be 18 or over to enter.