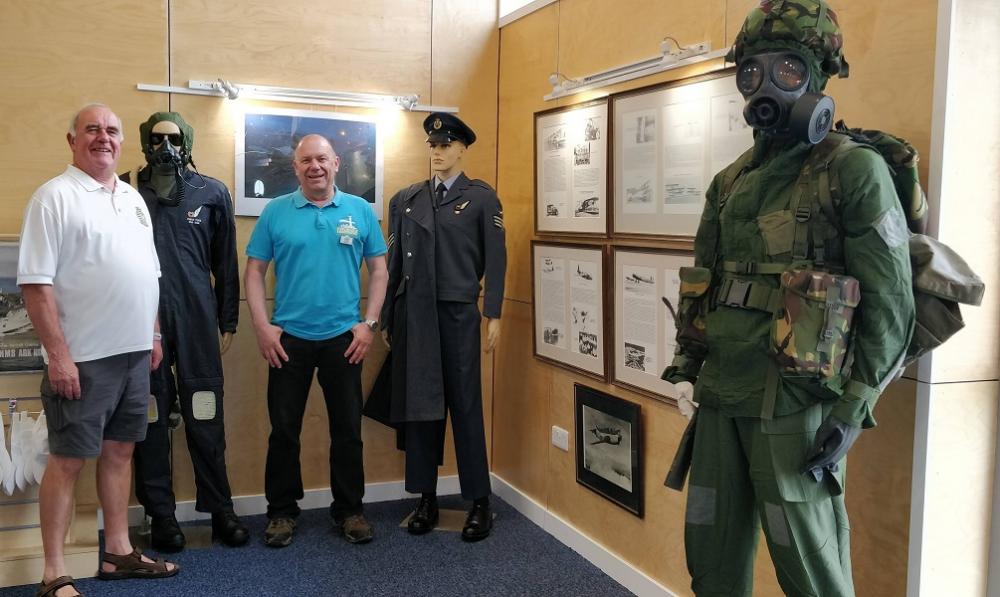 The doors of the Covesea RAF & Fleet Air Arm Heritage Centre were opened to the public on 16 June, with fifty interested visitors keen to see what was hidden inside. One of them was Karen Cox, one of the volunteers helping to keep insideMORAY on the road; she writes:

Covesea Skerries Lighthouse owners, Covesea Lighthouse Community Company Ltd, were responsible for the planning and construction of the heritage centre and the wooden, grass-roofed building sits comfortably between the Lighthouse and Silver Sands Caravan Park.

Dave Clark of the HMS Fulmar and Buccaneer Associations explains, “About five years ago someone asked about getting the HMS Fulmar Bell back to Lossiemouth and so the hunt was on for the Bell and somewhere suitable to house it.”

Historically, the Ship’s Bell was used to tell sailors the time. With no clocks on board, they used natural methods of telling the time – the sun and moon for example, and the bell was rung to signify the changes in watch as well as welcoming VIPs, giving warnings and mourning the dead. The full story on how the Ship’s Bell was used can be found at the Heritage Centre and is a very interesting read.

“It took a couple of years and several conversations with fellow Association members to track down the missing Bell,” Dave recalls. “It had been sold on after the station had been handed over to the RAF in 1972 and few people knew its whereabouts, until a chance conversation with a member of the Nautical Club in Birmingham led to the discovery that it was in that very person’s garden! We were delighted when the remaining members of the Club agreed to pass on the Bell; the day it arrived back in Lossiemouth and officially handed over to the community was a proud day indeed!”

With the Bell back in Lossiemouth, the important task was to find a suitable home where it could be put on display for the community and so, after securing the necessary funding, the Heritage Centre was built.  Retired RAF Sgt, Chris Tuke put his weight and support behind the project and, alongside Dave, the Centre soon began to take shape and the collection of memorabilia grew. Chris even handed over his own flying suit and uniform from his time on 206 Sqn at RAF Kinloss, plus some commemorative whiskies.

Fast forward to 16 June 2018, and the Covesea Lighthouse Community Company had the pleasure of announcing the opening of its Royal Air Force & Fleet Air Arm Heritage Centre in Lossiemouth. Dave and Chris were on hand to answer questions with other volunteers there to help show people round. The room is filled with interesting memorabilia, photographs, books and information of Lossiemouth’s long and proud military history, there’s a vast collection of model aircraft, thanks to Morayvia, and there are even a few souvenirs for purchase.

The Centre was open again on Sunday for Father’s Day, and will be open Saturdays 10am – 4pm & Sundays 10am – 3pm. More opening days will be added later as more volunteers become available. If you would like to arrange a visit, you can contact Chris Tuke on 01343 835537 or by email to chrisptuke@gmail.com