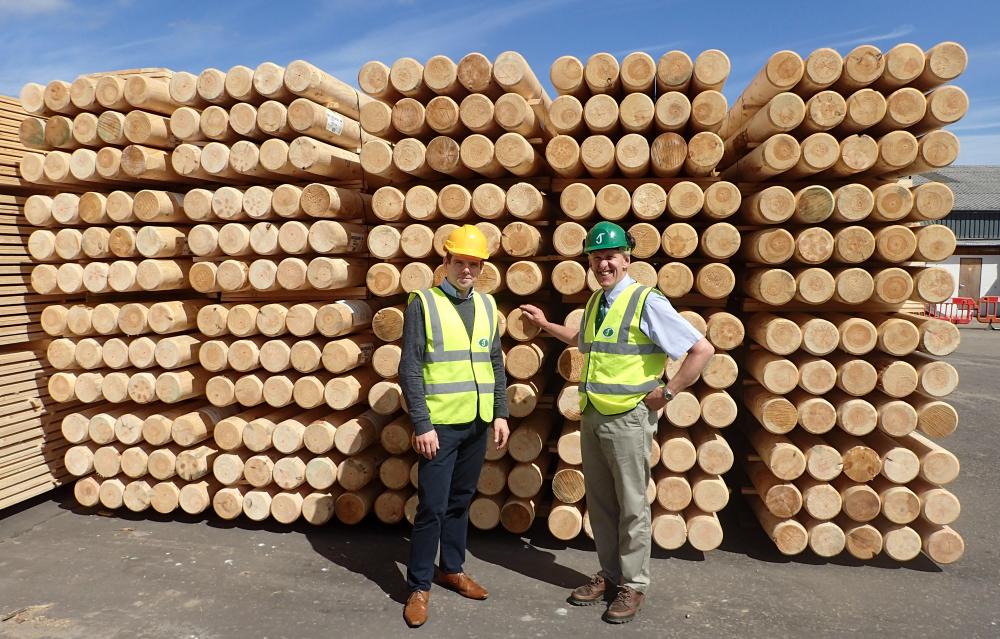 Moray MP Douglas Ross, visited James Jones and Sons Ltd.’s Mosstodloch sawmill on Friday to find out how the company’s on-going programme of investment in North East Scotland is creating rural jobs in Moray and contributing positively to local economies in Scotland as a whole.

During his visit to the sawmill, which now employs more than 80 people, Douglas was given a tour by James Jones’ Director David Leslie, and senior site manager, Neil Petrie.

Mr Leslie outlined in detail the development programme that James Jones and Sons Ltd has been undertaking at Mosstodloch in recent years totalling £10 Million, the latest investment being the development of an innovative round fencing line, the first in the UK of its type.

The site specialises in carcassing, fencing and palletwood and also has a timber retail centre that has become an important resource for the local domestic and agricultural markets.

The sawmill also offers opportunities for young workers in the area and currently employs two mechanical apprentices and one electrical apprentice.

David Leslie, Director James Jones & Sons said, “Since acquiring the site at Mosstodloch almost 30 years ago we have invested continually at the site as well as elsewhere in the North East and South West Scotland. We are committed to further investment in the North including ongoing projects of £8.5m at our Forres I-Joist plant and £5m at our Aboyne sawmill over the next year. This visit has given us the opportunity to demonstrate first hand to Mr Ross the important contribution our company is making to the local economy here in Moray and what an integral part of the community James Jones Group continues to be.”

Stuart Goodall, Chief Executive of forestry and wood trade body Confor, said: “James Jones & Sons and other member businesses have invested hundreds of millions of pounds over the last decade to create some of the world’s most advanced wood processing facilities here in Scotland.

“This has helped the forestry and timber industry in Scotland to deliver more than £1 billion in annual economic value and it now supports well over 25,000 jobs, largely in rural areas.”

Mr Goodall added: “Confor works closely with the All-Party Parliamentary Group on Forestry (APPGF) at Westminster, which campaigns to ensure forestry and wood is central to our rural future. We encourage all MPs to join the APPGF to ensure forestry and timber can deliver the widest possible range of economic, environmental and social benefits.”

Commenting after his visit, Douglas Ross MP said: “Since first being elected to represent Mosstodloch over 10 years ago I have been aware of the important role James Jones & Sons have played in the local area.

“They’re a considerable business employing many local people and clearly they are employers who treat their staff well. I heard of several employees, who had worked at Mosstodloch for 40 or 50 years.

“The visit was an ideal opportunity for me to see the huge range of products which are made at the Mosstodloch sawmill, and the sheer volume of timber which leaves this site destined for locations all over the UK.

“I’m very grateful to David and Neil for taking the time to show me round the site. It is a significant national business and local employer and I’m keen to work with them going forward as I am sure James Jones & Sons will continue to invest and expand in Moray in the future.”