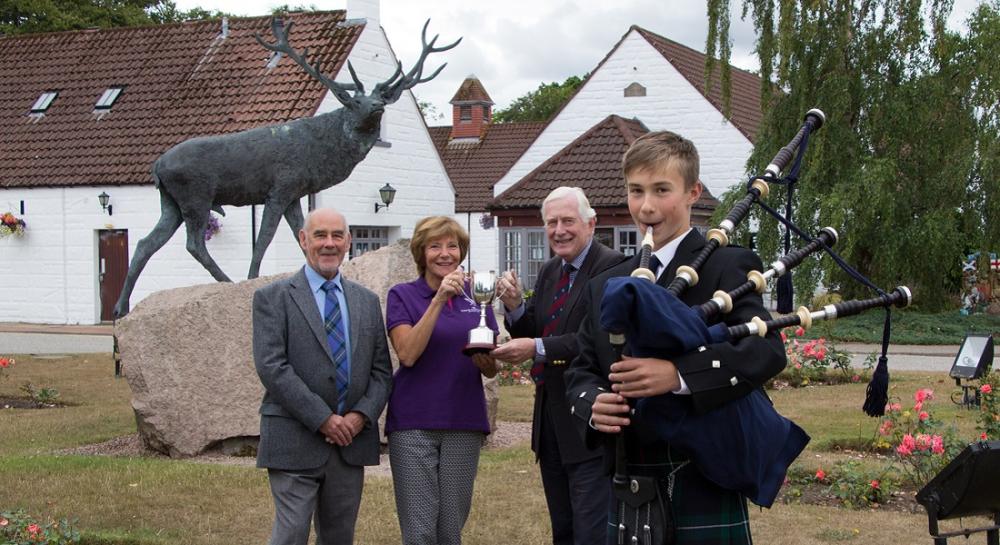 Two new trophies have been launched for the world’s premier piping contest which takes place in the Highland capital this month.

Young performers will be able to compete for a new junior trophy, whilst members of the armed forces could take home a new award at the Northern Meeting Piping Competition which takes place at Eden Court.

The trophy for junior players – the Gordon and Ena Baxter Foundation Trophy – was formerly presented for the best young performance at the Highland Military Tattoo.

However, after it was announced the Tattoo would no longer take place, it was agreed the trophy should be donated to the Northern Meeting for the best young player from the Highlands and Moray.

Major General Seymour Monro, Chairman of the Northern Meeting Piping Trustees who organise the contest, said he was delighted the trophy now has a new home.

He said: “It was originally a Highland Military Tattoo Award for the best young performance. However, following discussions with the Gordon and Ena Baxter Foundation, it was decided it could be re-assigned for the Northern Meeting.”

He added: “There is no more fitting place for this trophy particularly as Scotland is celebrating the year of Young People. Whether it be playing solo or as part of a band, it’s so important that we encourage youngsters to take up this traditional Scottish instrument.

“There is a huge drive amongst the piping fraternity to encourage more young players and this year the Northern Meeting will be welcoming young players from all over Scotland and a number are also coming from Canada and New Zealand.”

Kay Jackson, manager of the Gordon and Ena Baxter Foundation said: “Junior piping and drumming has become increasingly more popular in the North East. It is great to see youngsters enjoying their involvement in safeguarding such an important part of our Scottish heritage for generations to come.  Trustees are looking forward to hearing more from these young musicians at this year’s Northern Meeting and we are delighted to see this trophy be given a new lease of life.”

The second new trophy for a piper serving in the armed forces has been donated in honour of the Lieutenant Colonel DJS Murray who died in January 2017.

Lt Col Murray was a soldier and piper and the trophy has been donated by his family.

Seymour Monro said: “David was the Convener of the Northern Meeting Piping Competition from 1974 to 1986. He was key to bringing the event to its current venue of Eden Court and made other innovative changes which have helped grow the contest’s popularity over the years.”

He added: “He served in the Cameron Highlanders and the Queen’s Own Highlanders and did more to encourage high quality piping in the Army than anyone else in his generation. Winning this trophy donated by his family will truly be an honour.”

The Northern Meeting Piping Competition will take place at Eden Court Theatre on August 30 and 31 and attracts competitors from as far afield as Canada, America, New Zealand, Australia and Europe. It is classed as being the finest solo piping contest in the world.

It has been held in Inverness since 1841 and it’s dedicated to Scotland’s unique form of theme and variations played solely on the Highland Bagpipe, known as piobaireachd or pibroch.

Also performed are the March, Strathspey and Reel and Hornpipe and Jig Competitions.

Piping is at the heart of Scotland’s identity and the Northern Meeting plays a key part in promoting this rich musical heritage among Scots, and friends of Scotland, across the world.