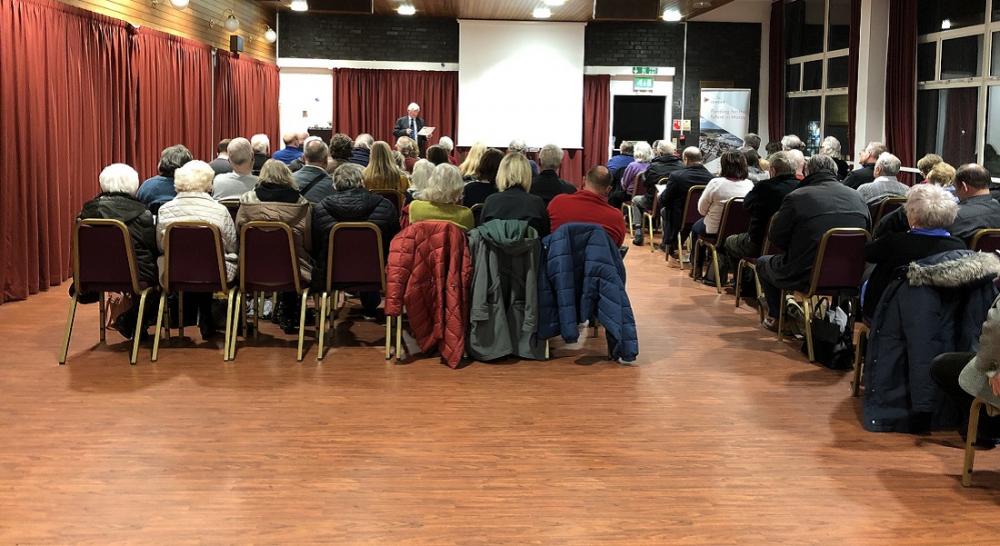 The people of Elgin have turned up in good numbers to learn about and support plans for Cooper Park’s Grant Lodge.

The Grant Lodge Trust is running a community engagement campaign as part of its preparations to submit a Community Asset Transfer application to Moray Council in a few months’ time.

Last week, an audience of nearly one hundred watched with great interest a compilation of old silent films from Elgin hosted by the Trust in the Moray Playhouse.  This consisted of the Opening of the Cooper Park and Grant Lodge in 1903, two from the Elgin Charcity Days of 1933and 1935 and one from the Keith Show of 1951 with the whole show lasting about forty minutes.

For those who missed the show, these films can be viewed via the Friends of Grant Lodge website at http://www.grant-lodge.org.uk

On Wednesday evening, 16 January, Grant Lodge Trust held a second event in the form of a public meeting in Elgin Town Hall, giving people the opportunity to find out about the current condition of the Lodge and the Trust’s vision for its future.

Again, almost one hundred members of the public braved the dark and the damp to attend the meeting in the Supper Room of the Town Hall.  Board members of Grant Lodge Trust and committee members from the Friends of Grant Lodge were also in attendance for the question and answer session.

Grenville Johnston, chairman of GLT, hosted the event and began by handing over to Caroline Webster, who is a surveyor and Trust Board Member, to make a presentation on the structural condition of the Lodge.

Illustrated by slides, this showed that the Lodge is in substantially sound condition with an excellent roof but with some weathering to one of the pillars at the main entrance.  Inside, some areas had been stripped of internal goods both after the fire of 2003 and after the removal of dry rot a couple of years ago.  The dry rot was caused by water ingress due to blocked rainwater goods at the rear.  Moray Council had allocated £25,000 allowing repairs to be made.  The main concern today is the lack of ventilation.

A short film, taken inside the Lodge in October of last year, was then shown and a commentary provided throughout.  It was apparent from this that the interior of the Lodge is not in bad condition and there is plenty of space over four floors (basement to attic) to allow a variety of possible uses.

There followed a short presentation regarding the Moray Growth Deal.  This Deal includes plans for an Elgin Cultural Quarter, which also include Grant Lodge. Trust Board member Stuart Huyton said: “There is a possibility that the Growth Deal could finance the refurbishment of the Lodge, however, the timescale for that is unknown and could take quite a few years.  For this reason and, because of the uncertainty, Grant Lodge Trust will press on with the Community Asset Transfer application.  There may be convergence between the CAT and the Deal at a later date, but this would be quite sometime in the future.”

A vigorous question and answer session then took place, with contributions from senior staff from Moray Council and Highlands and Islands Enterprise.

Stuart Huyton added: “It is clear that members of the public in attendance are keen to have the Lodge Restored and many signed up to show their support for the Trust’s plans.”

Support to the Trust can be given by visiting the website at http://www.grant-lodge.org.uk/contact_glt.html and filling in the form there or by sending an email to: glt@grant-lodge.org.uk expressing interest.

Information leaflets are also available from the offices of tsiMORAY at 30/32 High Street, Elgin, which is open between 10am and 3pm most week days.