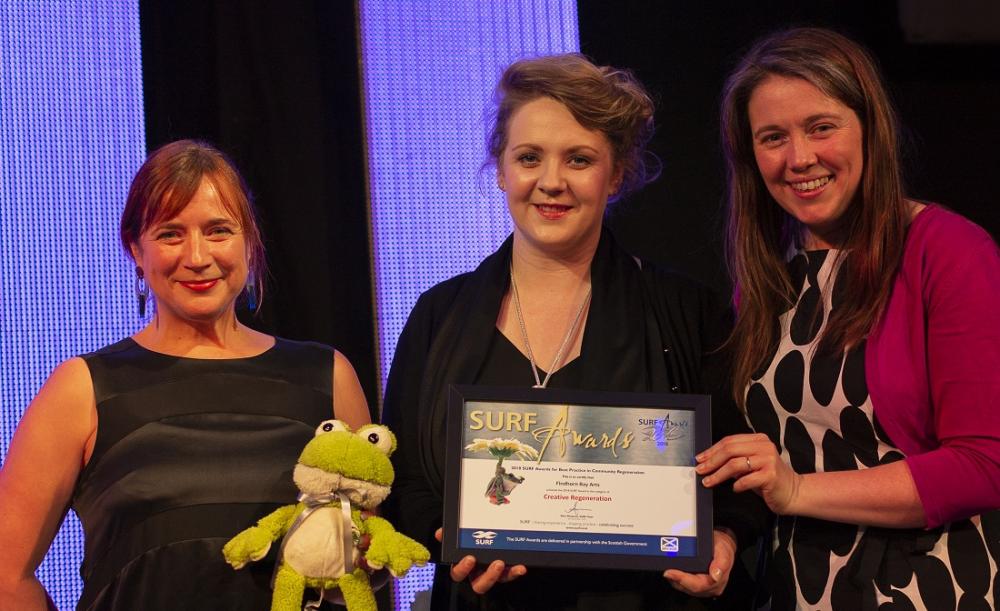 The third biennial Findhorn Bay Festival took place in and around the Forres area in Moray from the 26 September to 1 October 2018 with many sold out performances, free shows and exhibitions packing out with locals and visitors alike.  Over 315 visiting and local artists as well as young performers, contributed to the six-day showcase programme attracting an estimated 16,927 attendances across free events, ticketed shows and Culture Day Forres.

Festival Artist Karine Polwart said: “It was a delight to play to a sold-out audience of more than 450 in Forres as part of the Findhorn Bay Festival.  It’s a sign of the Festival’s quality, reputation and reach that such a small town and surrounding geographic area could host two other capacity events simultaneously – Shooglenifty at the Town Hall and The Buke of the Howlat at Brodie Castle.  The latter, in particular, cements the Festival’s national reputation as a producer of ambitious new participative work”. She added: “Findhorn Bay Festival, by growing capacity, and building relationships on the ground, and by generating a concentrated buzz of energy, offers a tremendous platform for growing the audiences of all the artists it programmes.”

Findhorn Bay Arts, the not-for-profit Forres based organisation that produces the Festival, undertook an in-depth post event evaluation through online feedback surveys and face-to-face conversations with visitors, artists, community groups, partners, volunteers, local businesses and participants to better understand the impacts of the Festival and to learn how the event can develop for years to come.

Evaluation results show that the third instalment of the Festival received strong support locally with 59% of the audience drawn regionally from the Moray area.  A further 36% visited from other areas in Scotland and 5% of visitors travelled from further afield across the UK and the rest of the world visiting from London, Dublin, Iceland, Australia, Germany, Ecuador and more.

Survey analysis showed 29% of visitors reported to have stayed at least one night over the Festival period, spending an average £71.21 per night’s stay.  79% of visitors reported to have also spent money in local shops, cafes, restaurants and pubs with the average spend amounting to £109.05.  The local business survey conducted showed that 62% of businesses experienced an increase in footfall and 43% reported increased sales over the Festival period.

Using the reported visitor spend in shops, on accommodation, and including the event funding which was spent locally, it is estimated that the 2018 Findhorn Bay Festival contributed in the region of £869,120 to the local economy adding a significant economic boost to the local area.

Festival Director, Kresanna Aigner said: “Partnership working lies at the heart of the Festival. Through working together, one small community has succeeded in strengthening the status of the area as a ‘go to’ cultural destination and one in which local people can develop and thrive.”

Volunteer participants played a crucial role in delivering events and activities with 335 people ranging from the ages of 16 to over 80 contributing their time for front-of-house duties, stewarding and providing support to participating community organisations.

The Festival was part of Scotland’s Year of Young people 2018 and staged a world premier theatre performance of The Buke of the Howlat in the grounds of Brodie Castle.  Written by local playwright Morna Young and directed by Ben Harrison, the production embraced and celebrated the energy, enthusiasm and talents of local young people.

An award-winning cast and over 50 community participants, which included students from Moray College UHI NC Acting course and Drumduan Upper School, took to the stage to perform while others worked in the background learning new skills and gaining professional experience in design, technical and stage production.

Findhorn Bay Arts has been recognised and rewarded for the contribution the organisation and the Festival makes to the local economy, to tourism in Moray and to the benefit of the wider community when it was awarded the 20th Anniversary SURF Scotland Creative Regeneration Award in December.  The Festival was also named as a ‘top 10 must visit event’ by TripAdvisor affiliated site booking.com.

Kresanna Aigner continued: “Through our creative events and activities, we have again demonstrated the resounding positive economic and social benefits brought to the local area through the Festival. However, as we celebrate the fantastic outcomes of 2018, we enter 2019 facing substantial cuts in budgets, locally, nationally and from EU funding coming to an end.  This presents a pressing challenge for us to broaden our partnerships with sponsors and funders in order to sustain the Festival and our year-round programme of creative learning activities. The Findhorn Bay Arts Board and team are now working with our partners to identify new opportunities and support which is essential to enable us to continue our activities and creative learning programmes throughout the year and to deliver the 4th Findhorn Bay Festival in 2020.”

The biennial Findhorn Bay Festival is planned to return, pending funding, the last long weekend of September 2020, Wednesday 23 to Monday 28.