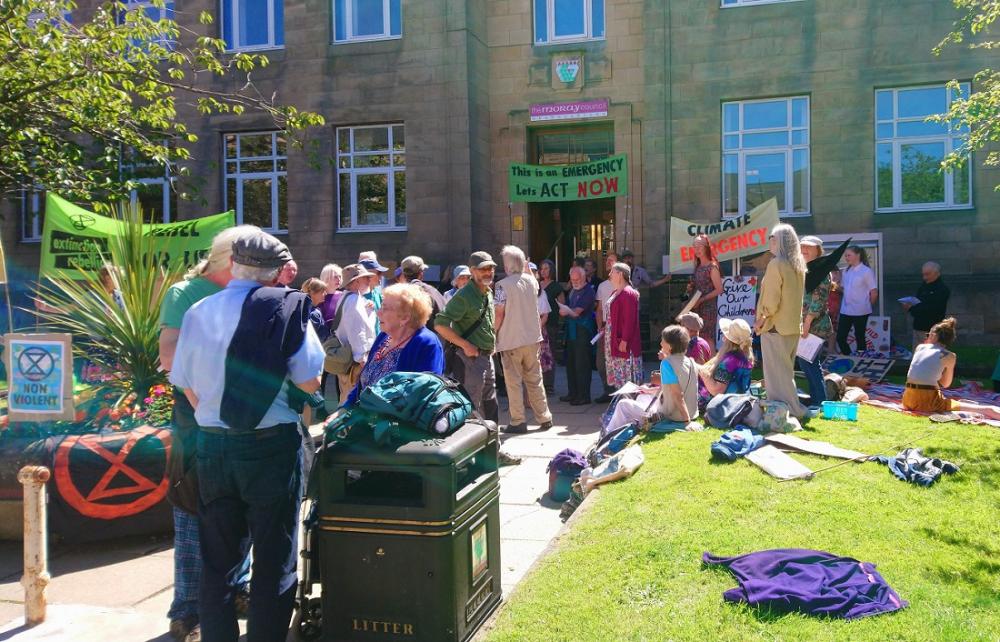 In colourful scenes in front of the Council’s Headquarters in Elgin High Street, demonstrators from across Moray presented the Council with a petition supporting the motion and demanding action.

“Individuals alone could not make the changes needed without the cooperation of local and national governments”, petitioner John Lardner said, “nor could governments at all levels make changes without support and cooperation from the people. However, once a climate and ecological emergency is recognised on all levels, everyone can do their bit.”

Moray Council is already progressing energy-efficiency projects, including its LED street light replacement programme, which is ahead of schedule and currently £132,000 under budget. It’s also expected to deliver annual electricity savings in the region of £350,000.

Additionally, eco-friendly measures are being included in school refurbishment and new-build projects, including external cladding for insulation, upgraded hot water and heating systems, and upgraded roofing.

Convener of Moray Council, Cllr Shona Morrison, is pleased with progress but says there is more than can be done: “We’re already taking steps to lower our carbon footprint; just this month we launched an electric bus serving rural communities in Moray, while cutting emissions by up to 70 per cent, and Speyside’s low carbon hub is another great example of how we’re offering alternative, greener travel.

“We must look beyond this though, take on views from the community, and continue to be proactive in introducing new and innovative ways to meet our target of becoming carbon neutral by 2030.”