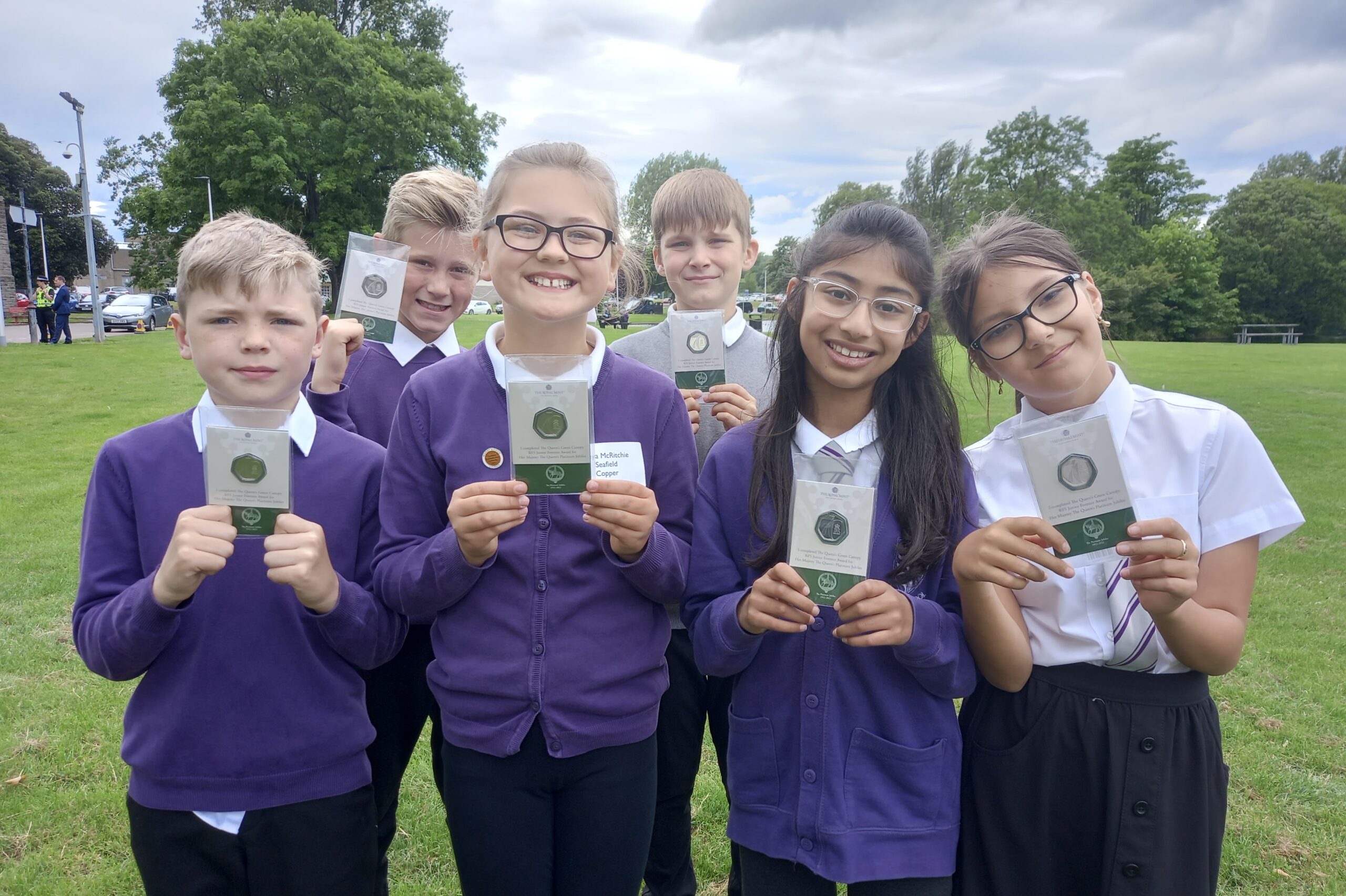 SCHOOLCHILDREN, community organisations and volunteers received Royal recognition yesterday (28 June) during a visit to Moray by The Earl and Countess of Wessex and Forfar.

Following a visit to Gordonstoun in the morning, Their Royal Highnesses unveiled a commemorative plaque at The Queen’s Green Canopy ceremonial avenue in Cooper Park, Elgin. Seven lime trees have been planted to represent Her Majesty The Queen’s seven decades as monarch.

Since May 2021 thousands of trees and saplings have been planted across Moray and Banffshire by 12 community groups, 21 schools and nurseries, with more planned for the next planting season. The Vice-Chair of The Queen’s Green Canopy committee, Rebecca Russell DL, said it was an honour to welcome The Earl and Countess to recognise the tree-planting efforts in the area.

“Across all of Moray and Banffshire we have seen numerous local schools, businesses, and community groups plant trees to mark The Queen’s remarkable 70 years on the throne.

“All those who have played a part in The Queen’s Green Canopy project should be incredibly proud of all they have achieved. And it’s not too late to participate – you can do so during the planting season between October 2022 and April 2023.”

While in Cooper Park, 21 pupils from Seafield Primary School in Elgin were presented with Royal Mint Jubilee coins, for their work in achieving the Junior Forester Award. Recipients of this award have planted and learned how to care for trees in their school grounds, providing a home for wildlife and capturing carbon.

Head Teacher, Morven Snodgrass, said: “Primary 5/6 at Seafield had tremendous fun in their local woods, participating in the Junior Forester Award, supported by staff and parent/carer volunteers throughout the chilly month of November.

“Weekly outdoor learning was followed up by in-class learning, where the children developed skills in their forest location and found out about the role of a forester. Pupils found out about wild places, protecting wildlife, biodiversity, and deforestation.

“As part of their work, they planted trees accessed via Woodland Trust in the school grounds. The most important part of their learning was giving back to nature and how we need to nurture and look after wild places.”

Those in Moray’s lieutenancy area who were announced earlier this month as recipients of the Queen’s Award for Voluntary Service: Moray Food Plus; Gordonstoun Fire Service; and the Duke of Edinburgh Awards’ Moray Committee, all received their certificates from The Earl and Countess during today’s visit. The award is the highest recognition a local voluntary group can receive in the UK, and is equivalent to an MBE.

Volunteer Development Officer for Moray Food Plus, Gillian Pirie, said: “We are delighted that the volunteers’ hard work and dedication has been recognised with The Queen’s Award for Voluntary Service.

“Our volunteers are at the heart of everything we do and we can’t thank them enough for their unwavering support of our service.”

Principal of Gordonstoun, Lisa Kerr, said: “Gordonstoun’s Fire Service has helped the local community for 80 years, putting out hill fires, farm fires and pumping floodwater out of people’s homes. Most importantly, by taking part in this service, our students learn the value of putting others before themselves.

“There is no better way of nurturing a sense of responsibility towards the community than by showing students the difference they can make at a young age, and we are honoured to have The Earl and Countess at Gordonstoun to present The Queen’s Award for Voluntary Service to our students and staff.”

The visit concluded with the unveiling of a commemorative stone at The Duke of Edinburgh Award anniversary stones and gardens, by Fochabers cricket pitch. Their Royal Highnesses met with Duke of Edinburgh and Moray Badge recipients, and with volunteers from Fochabers folk and heritage Museum.

“Fochabers Heritage extends a warm welcome to all visitors who now come to appreciate the superb collection of artefacts on display. This has become an integral part of the museum’s mission to reflect the rich heritage of this part of Moray.”

Chris Cassels from Crown Estate Scotland, which owns the land at Fochabers where the stone is sited, said: “The Duke of Edinburgh Award memorial stones are an important reminder of the tremendous help and support provided to thousands of young people by the programme across many decades. We were pleased to be able to assist in their relocation by offering a piece of land at Fochabers.

“The new position at the village’s cricket club will provide a fitting public space for people to continue to enjoy their heritage and to be reminded of the benefits provided to so many people by the Duke of Edinburgh Awards.”

Deputy Lieutenant Joanna Grant Peterkin, who led the resurrection of the Moray Badge, said: “The Moray Badge Platinum Jubilee has been a highly successful project over the last year with about 5,500 children and young people taking part from 50 schools and groups in Moray and Banff.

“It’s been terrific to see them try a range of outdoor activities, skills and crafts since lockdown, resulting in their increasing confidence and positivity. Having their badges given out by Their Royal Highnesses, The Earl and Countess of Wessex and Forfar, is a wonderful tribute to their hard work and a great end to the project.”

Lord-Lieutenant of Moray, Major General Seymour Monro, said the visit by The Earl and Countess was a fitting finish to Moray’s Platinum Jubilee celebrations.

“We are delighted to welcome Their Royal Highnesses The Earl and Countess of Wessex and Forfar as an important part of Moray’s Platinum Jubilee celebrations.

“The Moray Badge is special to Moray and has been eagerly embraced by over 5,000 pupils! It is wonderful that Their Royal Highnesses have presented three Queen’s Award for Voluntary Services to Gordonstoun Fire Service, Moray Food Plus and The Duke of Edinburgh Award Team.

“It has been a marvellous opportunity for them to meet many young people and some outstanding volunteers.  What a happy day!”royal